Carol Reed had a sweet period in his film making career. I used to think that ended with 1959 OUR MAN IN HAVANA. After seeing Reed’s thriller THE RUNNING MAN, I think it may have extended slightly into the 1960s. Originally I thought that the more interesting element of this film was it being adapted by John Mortimer(he of RUMPOLE OF THE BAILEY). Reed’s thriller takes us to the funeral of Rex Black (Laurence Harvey). His grieving wife Stella Black (Lee Remick) returns home, into the arms of Rex. He faked his own death, for the insutrance after being diddled by Excelsior. They insured his plane  agency. Now Rex is off to Spain and the sun. Stella will join him. Then in steps Excelsior agent Stephen Maddox (Alan Bates). He is at first, entranced by Stella, Then suspicious of Stella and her multiple men. All with very similair looks and the like. 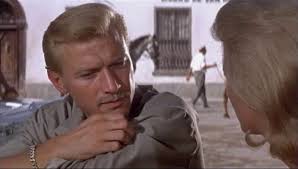 was less than impressed by this film on my original DVD watch. Then it was snotty, expected bladerdash. Now I see it for what it is. A clever, well paced thriller. One that zings with the comic and the sardonic. The best thing about it is Bates. An actor with great timing, beauty and a zip of primal. The script works to his idiom perfectly. Lawerence Harvey is also very good. A cad and a villian but also a man at odds with his own self interest. These two fighting over the vague Lee Remick urrked me before. 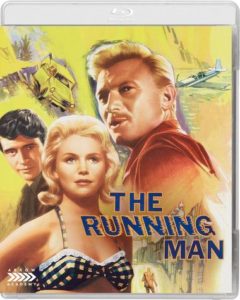 Now I get that Remick is no patsy, no fall woman. She is a calculating beast and one that plays the game well. Its on par with much of Reed’s best films and best direction.

The DVD was a very good transfer in my opinion. This 2K restoration is stellar. No surprise from Sony. However I would give them even more credit for making it bold enough to stand as a piece of art in itself. Bold words but they mean it is very good.

Listen to either Peter William Evans, author of British Film-Makers: Carol Reed (its broad, covers a lot of Reed’s career and should be taped to anyone that loves British film directors.) or Lee Remick at the National Film Theatre (Arrow have gone down the Powerhouse, Indicator route. It rolls over the film and adds less to the film but a lot to Remick being a very interesting film actress.)