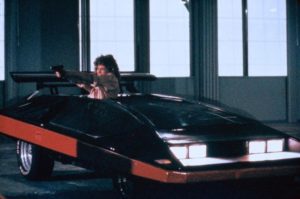 You know when a list of desires are put together by a group of film junkies, the list often include very bizarre things. A super car that can do tricks is high up on the want list, a spy thriller might appear, an action film with explosive action no less and a love story that is more naked and less intimate is there definetly. BLACK MOON RISING selling points are myriad. It has the selling point of being written by John Carpenter (well based on his sotry and he helped craft it). Its cast includes The Fugitive’s Tommy Lee Jones, Terminators Linda Hamilton and non other than villian and spy hero Robert Vaughan. Then it has that sweet, sexy car and the added acclaim of it being a real one off. Sam Quint ( Jones) is working for the FBI as a off the books theif. He steals a data file from a corporate crime syndicate and hides it in a new supercar prototype called The Black Moon. This car is easy enough to find. That is because a group of investors want to buy it, however when it is stolen by a super car stealing syndicate headed by Ed Ryland (Vaughan), Quint has to spill blood to reclaim it and the data file. 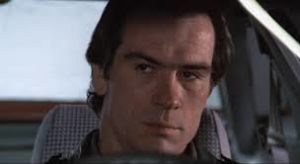 I cant really be over optimistic about the chances of BLACK MOON RISING being held in great regard. I know that it has a cult following. Possibly because it fuses two well know ideas. One that reminds me of a better film like BLUE THUNDER (super device that is mis used) and TV series like KNIGHT RIDER (super car and super person behind it). I cant really understand why it has this after viewing truthfully. It does not deserve it. Bouncing between the bizarre and ridculous. From its ludicrous simplistic plot, which forces the viewer to suspend disbelief and common sense. To its weird crowbarring of romance, haphazard action, violence that is well cherographed but feels unnessecarily prolonged. Sadly what you end up with is a film that might be a popular cult favourite but lacks nothing more than a single viewing can give you.