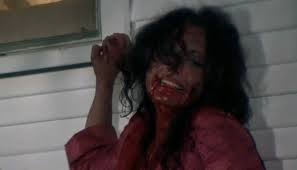 Based on real events and set in Texarkana, a small and pleasant town on the Arkansas and Texas border. This town would remain unremarkable until a series of horrific murders and assaults take place in the summer of 1946. It begins when Sammy Fuller and Linda Mae Jenkins are brutally beaten to within an inch of their lives. Detectives investigate but when this draws a blank and a second attack ends in murder the town takes action. High profile Sheriff Barker and sidekick Deputy Ramsey are brought in. They have a month to work together to locate the murderer. He has no distinct marks and all those who survived can say of him is that he wears a sack with two eye holes cut out. The other thing they remember is that he is a born monster. Using a stick, trumbone and other sadistic devices he tortures and kills couples. Will they find him or will his crimes go unpunished and unresolved. 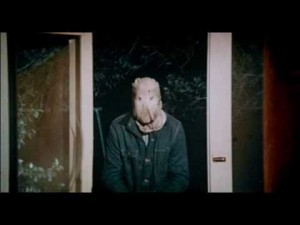 He is watching you!

The period this film was made in had seen a revived American cinema focus on low budget, exploitation films mixed with great genre topics. Horror was the main genre that became the stock of many a drive in and theatre. Films very much like this one. Often they took an event thta had social or cultural currency and then pressed into it a tougher and grimmer feel. Based on an urban legend and real historical event, this also uses the technique of harsh violent set pieces with ill fitting comic relief. This made me think of that classic of grim and grot, Last House on the Left. This film is a few miles from that however. This wants actually to be credible and juxtaposes the real with the unreal. A device that had been used much more effectively before and after. It also wants to juggle the crimes with popular reaction. It gets the panic but falls at exposing the social imbalance. It also wants to be a film that contains both wicked shocks at violence and smiles from silly and outrageous events in an equal pattern. Impossible as that sounds it trys. It also fails at this very much.

What the film does very well however is its serious and fiction based atrocities. The horror input into this is as effective as any film of the period and shows a real talent for build up. The cutting is critical to this but as I have often argued it is the director that has selected the shots and the framing. I can add that the director is also the comic relief in the film. He is the actor playing as Corkscrew. This reveals that he also had a lack of understanding as to what makes a film experience. Outside of this, the film is a real abnormal event. It sways from the ridiculous to the sublime. I hate that as it could have been brilliant and should have been better. It is a must watch however for any film maker that wants to understand tense, paced violence and set piece execution. It is also worth watching as a film that could have been so much more…