We Are Still Here DVD Review 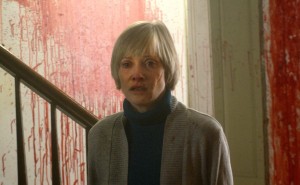 Ted Geoghegan’s dark and twisted tale, We Are Still Here is a hauntingly beautiful jaunt through the snowy landscapes of New England. We Are Still Here is the story of Anne (Barbara Crampton) and Paul (Andrew Sensenig), a couple who have recently lost their son in a car crash. They move to the countryside for a quiet life and to recuperate after their devastating loss, which has particularly affected Anne who seems to be spiralling into a darkness, into a depressive state.

When they move in, Anne quickly senses that all is not quite right with their new house and she is sure that there are spirits around them. Paul believes this is just a coping mechanism and doesn’t intend to play into these fantasies. The couple learn quickly that the small town has secrets of it’s own and they lay dormant in this normal looking house. Quickly after moving in, the neighbours start to hint that the houses’ dark past has claimed the lives of others and that a spirit waits for thirty years before demanding a sacrifice – the time is now. To help them, Anne invites her friend May (Lisa Marie) and her husband, Jacob (Larry Fessenden), a pair of hippies with a penchant for the spiritual and for the psychic world. Anne believes that May would be able to tell her if her son is in the house with them and if not, what is causing things to go bump in the night.

Geoghegan cleverly shifts the gears of We Are Still Here about half way as the first act comes to a close – at first his film admires the beautiful surroundings of this world and moves slowly with the characters, taking part in their grief over their dead son, almost poetically at times. But suddenly as soon as the story becomes clearer and the demons come out to play, the film shifts in tones and pace, picking up and killing off quicker. It is a subtle change, but one that pays off incredibly well before the thrilling finale plays out. 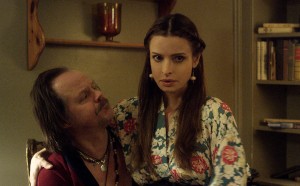 characters; from The Exorcist to The Shining and every in between. Also, he takes full advantage of scream queen Crampton, who is enjoying a revival of her own horror film career of late. She burns up the screen every time she is the focus, fully grasping the attention of the audience and not letting go. She brings a sense of sophistication to horror films and embodies so many different emotions at the same time through her speech but also her looks and movements.

Oscillating between poetry and action, the ghouls of We Are Still Here are threatening from the very start and the tension continues to build to the closing credits. A incredibly powerful and well made first feature from Geoghegan, and one to have on your must see list this year!