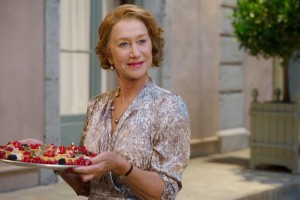 Helen Mirren and Om Puri star in Lasse Hallström’s deliciously lovely culinary ensemble piece. When the Kadam family watches their restaurant in India go up in flames, killing Mrs Kadam in the process, they decide to up and leave to try their luck in Europe.

The Kadams make it to France, all piled up in their van. And after a humourous moment at border control, they’re off in search of the place that will fulfill their dreams. Hassan, one of the sons, taught by his late mother, is a culinary genius and excited to be in France to follow his own dreams of being a chef. After the van breaks down, the family find themselves outside a small French village in the middle of nowhere. Thanks to the help of beautiful local, Marguerite, the Kadams spend the night in the village. During his morning walk, Papa Kadam comes across a farm for sale. He buys it and decides that they will open their restaurant there.  What he doesn’t realise is that the building opposite is Madame Mallory’s Saule Pleureur, a Michelin starred gastronomic restaurant, and Mrs Mallory, having heard the news, has no intention of seeing the Kadams succeed.

Based on a book by Richard C. Morais, The Hundred-Foot Journey is surprisingly adapted by Steven Knight who wrote both Dirty Pretty Things and Eastern Promises. It is a beautiful film both aesthetically and because it’s about family, the important things in life, and of course food. One could be confused at having Helen Mirren speaking English with a strange French accent, or her French also being pretty bad, or that a tiny village in the middle of France has so many people speaking English! But it works and isn’t as odd as it sounds. The performances are fantastic. We expect nothing less from Om Puri and Helen Mirren. It’s the youngsters though who steal the show. Manish Dayal as Hassan and Charlotte the Bon as Marguerite have wonderful chemistry and are definitely names to pay attention to.

Don’t be put off by the fact that Steven Spielberg and Oprah Winfrey have their name on this project. Very much like Salmon Fishing In The Yemen and Chocolat, Lasse Hallström proves he is a master of this genre.  Like a great menu The Hundred-Foot Journey has drama, humour and tears of happiness, leaving you fulfilled and smiling…hard!