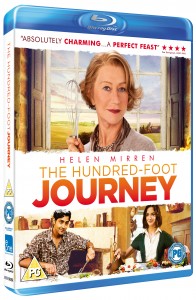 Hassan Kadam (Dayal) is a culinary prodigy who travels with his family to the South of France after being displaced from their native India.  It’s the ideal place to settle down and open an Indian restaurant, that is until Madame Mallory (Mirren), the icy proprietress of a Michelin starred French restaurant gets wind of it. Her protests against the ‘Maison Mumbai’ located a hundred feet from her own escalate to all out war between the two establishments – until Hassan’s passion for French cuisine and for a beautiful sous chef, Marguerite (Le Bon), combine with his mouth-watering talent to weave culinary magic between their two cultures.

The Hundred Foot Journey is available on Blu-ray and DVD from 9th March 2015, courtesy of eOne

We have three copies of The Hundred-Foot Journey on Blu-ray to give away.

Which British Queen has Helen Mirren NOT played?