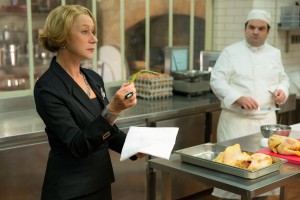 If you can get past Helen Mirren doing a French accent, then Lasse Hallström’s charming, beautifully shot tale, The Hundred Foot Journey is a delightful watch and sure to please those who enjoy films like The Best Exotic Marigold Hotel. This can be added to the canon of films that are surely aiding in the creation of a a genre of its own; older white, middle class ladies and gents being introduced to foreign cultures (usually Indian). In The Hundred Foot Journey, Hassan Kadam (a very handsome Manish Dayal) and his family are forced to leave their home behind in India after a political quarrel where their restaurant was burnt down and Hassan’s mother is killed. The film then quickly gleams over the drama of their lives in India as this is not that sort of film. The family find themselves crossing Europe in the hope to find somewhere to settle and reopen their Indian restaurant but not until they find the right place that their pallets feel at home and they know the locals will appreciate the range of tastes.

Along the way, their van breaks down in a little countryside village in France. They are helped by Marguerite (the charming Charlotte Le Bon), who brings them into the village and feeds them. Her platter is filled with numerous local delicacies and the family instantly fall in love with the flavours and sensations of the food. As Hassan was beginning to get a name for his cooking at home, he is attracted to the village but finds himself enamoured with Marguerite. When his father, Papa (Om Puri) decides to purchase a rundown old building right opposite a Michelin star restaurant, Hassan and his family need to start making alliances and quick.

Unknown to the Kadam’s, the restaurant opposite their new building is owned by Madame 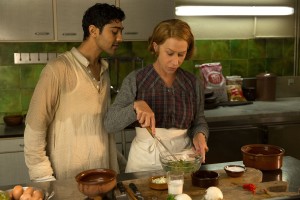 Mallory (Mirren), who has her heart set on getting a second star. People from all over the world come to her for the most delicate of meals; gourmet if there ever was. Instantly a rivalry starts between Mallory and Papa and when one night a group of young men headed by one of the chefs from Mallory’s place burn down the new Indian restaurant, the Kadam’s realise that they may never be welcome. But soon time passes as with these types of films; Hallström is never keen to explore the racism of the village too much and only lightly touches upon it. Instead, the relationship between Hassan and Marguerite and Mallory and Papa become centre stage. Everyone’s hearts and pallets seem to be on the line, so when Hassan starts to work for Mallory and helps her get her second star, he is quickly propelled to superstardom.

The Hundred Foot Journey is wary of its subject matter throughout; always shying away from anything too serious, this is a delicately told love story, both between people and with food. The film has a tight, life affirming message, which is represented through the Kadam’s introduction of spices to normal foods that Mallory and her customers may not be accustomed to. The spiciness or willingness to try something new, allows the characters to each learn more about themselves and those around them as well as guiding them all through a particularly rocky part of their lives. Whilst it may be a cliched message, it makes the audience smile nonetheless. 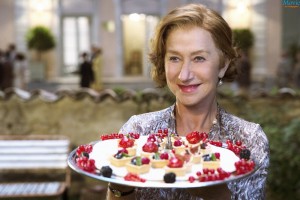 Mirren’s performance as presumed is flawless and whilst the role of Madame Mallory does not require her to pull together much of her acting muscle, it is still an entertaining role, with great chemistry with her co-stars. The scenes between Mirren and Puri are some of the best; they go through the motions of being enemies, to understanding and soon growing close as the film comes to a close. They play off of one another and whilst they both show their good and bad sides, they are both likeable characters by the end. Dayal does a great job, following Mirren in leading the film. He is a good, solid acting talent and someone that is destined to go onto great roles; he works the comedy and the drama of the film well and allows the audience and the camera to fall for him.

Overall a good effort, for an easy Sunday evening watch, The Hundred Foot Journey is a fabulous feast for all the senses.