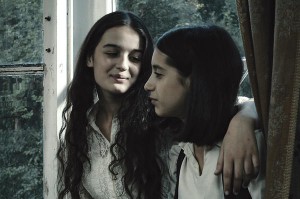 Nana Ekvtimishvili & Simon Groß’s In Bloom is a compelling and intimate take on the traditional coming of age tale. Set in the Georgian capital of Tblisi on the brink of civil war after the break up of the USSR, the central characters are two teenage girls who are trying to find their own places in a world filled with destruction and imbalance. Eka (Lika Babluani), lives alone with her mother who keeps secrets from her daughter about why her father is absent from the family. Natia (Mariam Bokeria) represents the opposite, finding herself in the middle of a working class family alongside her brother, old fashioned grandmother and warring parents who spend more time arguing than noticing the fractures within their family. This initial introduction of the pair’s lives presents an interest polarisation between the calm and the chaotic, something that Ekvtimishvili’s script and story aims to talk about throughout.

In Bloom aims to open discussion around a selection of themes in these girls lives; from their own families, to the their schooling, what it means to be a woman growing up in this dangerous atmosphere and their own relationships with boys and men. Natia has two romantic interests, Lado (Data Zakareishvili) is kind and calm and Kote (Zurab Gogaladze) who is part of the local violent culture, taking what he wants with force. When Lado leaves Tblisi to go to Moscow as part of the rebellion, he leaves Natia with a gun to protect herself. The first thing she does is share this weapon with her best friend; neither know when the other is going to need it. As for the symbolic importance of the gun within this war torn atmosphere, one can read many interpretations from Natia and Eka’s own place amongst the crowds to the sparring between all the people of the area – ultimately no one trusts anyone else.

As for the structure of the film, the episodic nature of the day to day lives of the characters opens up this world that 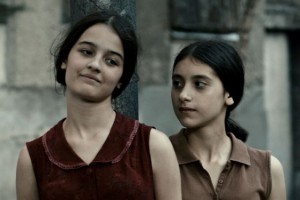 few know much about. This aids in the viewing of the film, despite the dramatic and intense ways that the events unfold. From Natia and Eka’s own schooling, to moments with their families, friends and even outside in the community itself. In particular, a motif that returns is the bread-line, where (usually) the women line up to collect the rations that their family have been allocated for the bread. When the girls cut into the queue, an argument erupts but this interesting moment allows the film is discuss the alienation that both the youth and the older members of the community feel from one another.

There is a lyrical feel to the way in which the film move gently from one scene to another; trying to show the audience that these girls still live normal lives, where they hang out with friends and sing, alongside trying to look after yourself when eventually the undercurrent of hatred and poverty will take over. In Bloom thrives when it gets to it’s moments of compassion or discussion about the true feelings of the characters; during one sequence when Eka dances at a party, it goes from beauty to insanity and back again – through this rhythmic flow with the always changing timbre and speed, the film is presenting to the audience some of the internal feelings of the character. 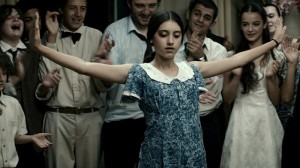 Furthermore, the cinematography adds a further layer to the story; luxuriating in greys and blues, keeping a blurry dull feeling allows the audience another way of really understanding the world of the characters. Despite their surroundings filled with poverty and destructions, there is still something so simple and beautiful about them. Furthermore, this beauty is also seen in the relationship between Eka and Natia, who are both so close and so widely apart at the same time. Both Babluani and Bokeria have great chemistry, it appears they have been friends for many years before film. Especially in the last 15 intense and shattering minutes, the film goes from an exploration of this community to an evocation of the danger the characters find themselves in on a daily basis.

Not an easy watch by any means, but an interesting one, In Bloom explores a world so rarely seen on screen and tries to open up a recent history for the audience.