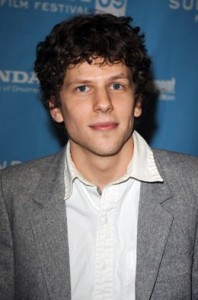 Vulture are reporting that Jesse Eisenberg (The Social Network, Holy Rollers) is to be cast in Richard Ayoade’s indie adaptation of Fyodor Dostoyevsky’s novella “The Double”. Ayoade is best known for his role as Moss in Channel 4’s The IT Crowd and for directing 2010’s comedy hit Submarine starring Craig Roberts as Oliver Tate, a teenager who is convinced he is a genius.

The 1846 novella, “The Double” is about a Russian government clerk whose life unravels after what he believes is a literal facsimile of himself — same appearance, same name, same hometown — begins working in his office. The main motif of the story is dealing with doppelgänger’s and the internal turmoil that the main character goes through.

Critic Roger Ebert gave the Submarine, three out of four stars saying “”Submarine” isn’t an insipid teen sex comedy. It flaunts some stylistic devices, such as titles and sections and self-aware narration, but it doesn’t try too hard to be desperately clever. It’s a self-confident work for the first-time director, Richard Ayoade, whose purpose I think is to capture that delicate moment in some adolescent lives when idealism and trust lead to tentative experiments. Because Craig Roberts and Yasmin Paige are enormously likable in their roles, they win our sympathy and make us realize that too many movies about younger teenagers are filtered through the sensibility of more weathered minds.”

The casting of Eisenberg isn’t official as yet but we are going to keep an eye on it and hope that it is the case as Eisenberg has shown he is more than capable of doing a variety of roles in the past few years. Eisenberg can next be seen in 30 Minutes or Less, due for release this year and by the makers of Zombieland.