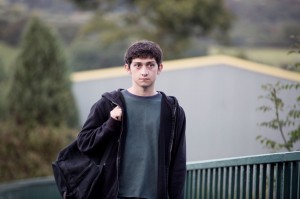 With very little hyperbole, it is easy to describe Craig Roberts’ Just Jim as one of the best coming of age films of the year. Not only once more adding another notch in the ladder for Craig Roberts as an actor (having wow’d audiences in Richard Ayoade’s Submarine and his appearance in The Double) but also as writer and director.

Roberts stars as the titular Jim, a teenage boy with no friends (except his pet dog) and very little to look forward to. He lives in a Welsh neighbourhood where everyone knows each other, his parents clearly prefer his older sister who has just left home and the one friend Jim did have, has gone over to join the school bullies and started dating the one girl that Jim liked. Roberts is good at awkward loner, he can pull together a mixture of Oliver Tate (from Submarine) and Harold (from Harold & Maude) with a sprinkle of all the emotions and feelings that as a teenager he is bound to have anyway and you end up with Jim. He spends his days running from bullies, walking the dog, playing with his scalextric, watching the same film over and over at the cinema and being questioned by his mum and dad as to why he has no friends. It really is an uneventful and quite sad life. The opening act of the film (of the very clear three acts) just follows Jim around. Roberts’ direction is so beautifully subtle and in tune with how the character is feeling; the audience always stay a bit away from Jim and aren’t expected to be his friend either.

Then act two begins and Jim meets Dean (a terrifying brilliant Emile Hirsch), an American who has just moved in next door. He instantly takes an interest in Jim. Why? That question becomes engrained on the thoughts of the audience but soon Dean realises that he can mould Jim into a little popular star and with that the audience are asked to suspend their disbelief and think Dean is just a nice guy who wants to help. He instantly befriends Jim’s parents (Nia Roberts & Aneirin Hughes), taking them out for dinner, getting them high and bringing a bit of laughter into their lives. Through a number of sequences between Dean and Jim (think Rocky like), Dean teaches how to be fast, be sneaky, look cool and how to act with girls (if a piercing, rolled up sleeves and some pushing was all that was required, we’d all be doing it!). But what Jim doesn’t see is the darkness of Dean, his violent outbursts around town create a sense of tension between this mysterious American and everyone else except for Jim and his family. Soon people become afraid of Jim because the two are aligned together and whilst this is meant to help Jim become popular, he is just alienated more and more. The third act is a crazy mash of surrealism, psychology, an acid rush and violence. Dean is certainly not as he seems and soon his intentions become clear – but how will that affect Jim?

The locations of Just Jim act just as much as an important character in the film as those who talk; the small town, the folk that live there, the rolling countryside 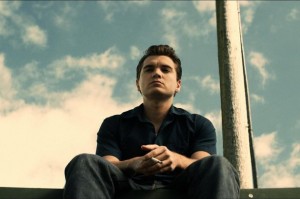 and the vast emptiness around them all represent the way that the characters feel. It further illustrates the emotions of the film and creates a world that is both like our own but also terribly dark and different. Just Jim may just be that kick start needed for a renaissance of Welsh cinema, something that has been happening with Irish cinema with films like Dollhouse, What Richard Did and Glassland. Furthermore, the performances from both Roberts and Hirsch light up the screen and set it ablaze. Their chemistry is spectacular, bouncing from one to the other – always bringing the audience in on their joke or the perhaps even the uncomfortableness of the situation but they are always aware of the audience watching. The casting of Craig Roberts and Emile Hirsch together makes the perfect dream team.

As with Ryan Gosling and Lost River (where it isn’t a far reach to suggest he was inspired by his work with Nicolas Winding Refn), it wouldn’t be unrealistic to suggest that Roberts has been inspired by working with Ayoade twice before. Just Jim has that carefully balanced mix of finding humour in darkness and surrealism, forcing the audience to fully give themselves over to the world of the characters.

Just Jim is charming, funny, surreal and just a hint of psychotic and certainly cements Craig Roberts as a star to watch for.