This time the catalyst is John Evans, an ancestor of Gruff Rhys – although you get the feeling that every dead Welsh man is somehow a relation. What makes Evans extraordinary is the journey he went on. In 1792 Evans left an impoverished Welsh village to travel to and into America with just $1.75 in his pocket. He had heard about a Welsh speaking tribe among the Native Americans and hoped to find them and perhaps a utopia for his countrymen to seek out. 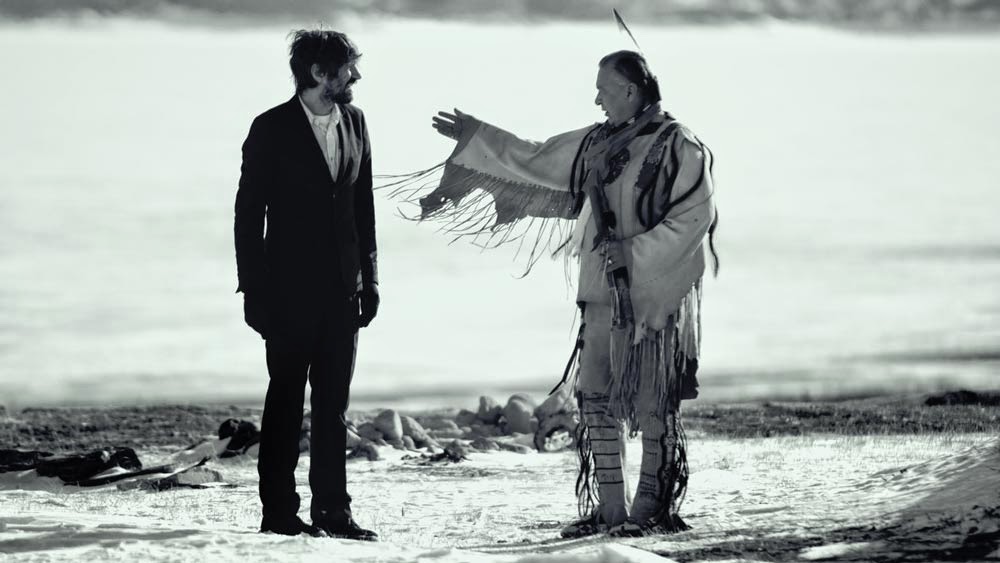 This is a time when much of North America remained unmapped and was split between Spanish, British and American factions. It’s a place where myths held great power and a random Welsh man can be seen as a spy, a prophet, and a leader just as readily as a naïve chancer. You can see what attracted Gruff Rhys to this story. It all chimes with his music in the way it embraces the bizarre along with a wanderlust for new lands and melancholia for those left behind.

So Rhys sets out to retrace Evans steps from Baltimore to St. Louis and beyond stopping off to talk to locals and experts and play gigs where he relays Evans story via a slideshow. Accompanying him throughout is his John Evans muppet-like puppet. This touch of cute quirk could have chaffed but instead serves to further link Rhys and Evans and remind us of this unknowable and elusive figure.

Gruff Rhys is a charmingly relaxed guide. His personable and inquisitive nature brings out the best in those he encounters while his enthusiasm for the man who became Don Juan Evans is contagious. The film does well to bring together the ramshackle elements while taking us along for the ride but in the hands of someone else (Werner Herzog perhaps) this could have soared into the mythical while retaining the bizarre details (unicorns do feature).

This film is merely one part of a whole American Interior suite of releases based on John Evans that include a book, an app and an album. While the music is typically accessible and effective the chance to observe the song-making process in tandem with the journeys progress is missed.

American Interior remains an appealing foray into one man’s journey that may lack the insight of true cinema but does feel like a genuine voyage of discovery for its contemporary Welsh explorer. If his family tree and the possibility of unicorns allowed it then Gruff Rhys would be a worthy successor to Michael Palin to guide us with humour and affection into strange new worlds.

‘American Interior’ is out now on DVD