The year is 1957 and in a small West German town Lola (Barbara Sukowa) is the star turn at “Villa Frank”, a brothel making the most of the booming economy. Bathed in red and blue light Lola sings from her gut before falling into the arms of the man who will pay most for her services – the brutish property developer Schuckert. 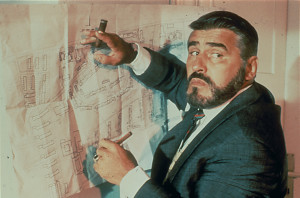 Meanwhile, in the cold light of day a new building commissioner, von Bohm (Armin Mueller-Stahl), takes office. His head seems as clear as his blue eyes, determined as he is to help progress without succumbing to the institutional corruption around him. Lola hears of this kind, pure man and decides to take on a different persona, of the decent, upstanding Marie-Luise (her real name), to seduce him. Like Ray Davies’ eponymous character Fassbinder’s Lola is defined by her contradictions.

This is the final part of Rainer Werner Fassbinder‘s trilogy about post-war Germany (that also includes The Marriage of Maria Braun and Veronika Voss). The characters reflect the society: the capitalist gluttony, casual bigotry, and inherent contradictions of a nation rebuilding itself under a Nazi shadow. These citizens all live divided lives. Take Von Bohm’s assistant Esslin, a man who spends his weekends as a radical campaigner and nights as a drummer and confidante to Lola at Villa Frank. 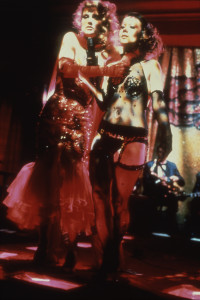 Fassbinder’s approach is also bi-polar with affectingly naturalistic performances set against the hermetic interiors and extreme colours of Douglas Sirk’s 1950s melodramas. But it is a mix that works, creating the sickly sinking feeling of being trapped in an oppressive world. Part of Fassbinder’s brilliance is the way the characters are unpredictable yet completely true. The storytelling here is similarly slippery, seeming to drift before soaring with Barbara Sukowa’s raw and commanding performance.

Like Maria Braun before her, Lola will do what it takes to negotiate the shifting landscape around her, choosing to put head before heart despite the personal pain. Lola is a portrait of a country and its people that is as beguiling and sublime as its protagonist.

“It’s a mixed up, muddled up, shook up world except for Lola, la-la-la-la Lola”

‘Lola’ is released on DVD and Blu-ray on 3 July