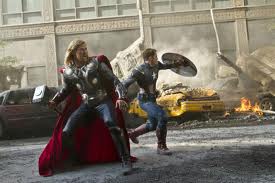 The fear for a film that brings together so many well-known characters is that the sum of them all does not add to the greatness but creates an entertainment implosion. After accepting that this movie has one of the worst titles ever conceived, fans and cinema avids have nothing to fear because Marvel’s Avengers Assemble ticks all the boxes. An action adventure that is fun to watch, whose grand speeches and declarations demand an unusually important grandeur and it all builds to a finale that does not disappoint.

There are some very talented actors in this film, albeit in fairly odd day wear. Tom Hiddleston might have the most ridiculous costume but he stands out for his performance as the venomous Loki, Thor’s (Chris Hemsworth) brother, who was lost in space at the end of Thor but is now back with the help of the asteroid dwelling Chitauri. His mission is to capture the Tesseract, a cube of limitless energy which could allow a vast army to lay siege to the Earth, with only the colliding egos of the Avengers to save it.

The snarling, devious Loki is not the only character that impresses, the much maligned reinvention of The Hulk is carried perfectly by Mark Ruffalo who jumps to the top of the podium ahead of Ed Norton and Eric Bana in actors to take on the green rage monster. Ruffalo give the impression he has been chewing on some chewable valium, exuding calm to avoid his alter-ego making a show stopping 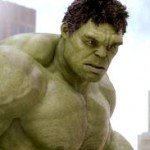 Joss Whedon’s script is multi-stranded enough to keep even the most Ritalin addled mind in check without being obtuse. An element of the genius behind Loki is that while he is a worrying opponent, frighteningly screaming from inside a glass prison we know will not be holding him for long at Black Widow (Scarlett Johansson) denouncing her as a ‘mewling quim’, it is clear that there is much worse to come than him. He is the lackey of some greater evil the Avengers must still face. A sequel you ask? Or course there will be.

This is not ‘Iron Man 3 with Friends’ as the trailers envisioned. Though Tony Stark (Robert Downey Jr.) is the fulcrum on which the Avengers success depends, the stage is shared equally, the Avengers is truly the only place where Hawk Eye (Jeremy Renner), a throwback to Robin Hood days, could co-exist with a Norse style demi-god. The film benefits from the sharing of the limelight as every one of these characters is appealing enough to hold it for a feature length film, as many of them have done. Bringing them together was never going to be easy but Marvel picked the right man to do it. 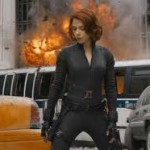 Whedon’s direction has a touch of J. J. Abrams about it, evoking the stylish remake of Star Trek, though occasionally fight scenes are disorientating, he knows his way around the action. He also knows when to trim the Michael Bay style slow motion scenes down a little, allowing the audience not to slip into a boredom induced coma while appreciating the scale of S.H.I.E.L.D’s gargantuan flying aircraft carrier, a rare talent.

Popcorn movies are so often derided by critics but it is impossible to dismiss one that is this fun. The Avengers come together with a good dose of humour and action without ever crowding each other out. A franchise combination that genuinely leave you hungry for more.