Made in the same year as DJANGO, TEXAS ADIOS is might be seen by some fans as the uneven continuation of the franchise. Burt Sullivan (Franco Nero) is a sheriff who is not afraid to play rough. His younger brother (Alberto Sell’Acqua) wants in on the fun but Burt is not happy to indulge him. Both however want revenge for the death of their father. An honest man, he was living and surviving when he met a demon from the dust. You see the legendary Mexican bandit Cisco Delgardo, killer and exploiter, fighter and invisible nightmare, murdered him in cold blood. Burt decides that a bullet is all that Delgardo deserves now. Finding him is almost impossible. Though it seems every time they mention his name, many others want to stop them in their tracks. Delgardo is an enigma, a phantom. He might also be the biggest enforcer around… 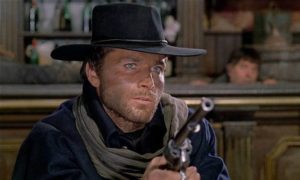 Labelled DJANGO 2 (not to be confused with the actual DJANGO 2) in some territories, TEXAS ADIOS comes at you with less in the tank. Titled such, to play on the success of the first film and the star Nero, it is far less challenging, unconventional and blood soaked. It is however still dust covered and sweat stained enough to feel a part of the genres best. Nero gives us the Django swagger. That face, so stern and so unphazed. Director Ferdinado Baldi (whose best film BLINDMAN is still unavailable in the UK!), may have seen DJANGO and suggested Nero play up this. The camera exploits his face and his magnetism. The camera also plays to other Western elemental forces. The script gives us a family matter, settled with fists, guns and action scenes that spill over. It is all soaked up by the mechanic eye. It also captures the nasty versus the nice, the power struggle and the good guy as remorseless enforcer. 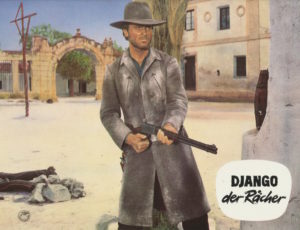 The 2K scan has both saved the lightscape and enhancing the blemishes. The worst are the washed white tavern scenes. The best are in the town shootouts. Audio commentary for by spaghetti western experts C. Courtney Joyner and Henry C. Parke is PACKED to the brim with film detail of Nero, Baldi, the genre and the movement. I like its tid bits on the villian as well.