Tales Of The Night Review 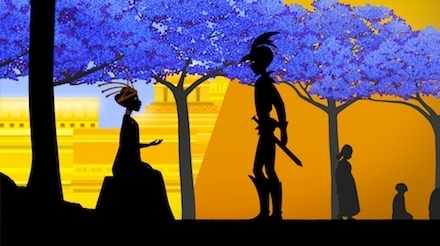 Michel Ocelot favours style over substance in his animation that lacks narrative depth. Ocelot tells five stories of princes and princesses, magic and bravery in the classic fairytale manner but with his distinct visuals to add a new dimension to the uninspired stories.

The story begins in a rundown cinema in France where three people, the young Boy (Julien Beramis) and Girl (Marine Griset) who create and act out the stories along with the help of projectionist and organist Theo (Yves Barsacq). This is the most inventive section of the film as the young thesps discuss which story to re-enact and dress up with the help of a fantastical machine that dresses the pair before their performances. The stories themselves however are fairly formulaic in the sense that they follow conventional fairytale themes. Vanquishing of monsters, betrayal of love and magical figures are ever present. Although the tales are entertaining there is nothing new or original about them.  The originality lies in the process between the short tales and this is not enough to thoroughly impress.

Ocelot produces an optical feast with his animations of black figures against extravagantly decorated backgrounds. He dresses his heroes and heroines creatively given they are simple 2D characters and the addition of fantastical creatures, werewolves, dragons and 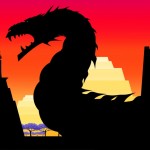 the odd nipple add to the titillating delight he delivers. Whether or not this style will be appreciated fully by children remains to be seen but adults can fully appreciate what is on offer here, even if the stories may be found lacking.

A delightfully refreshing spot of low key animation that starts to let the mind wander due to lack of thought provoking material. Although you may find yourself shifting in your seat from time to time, Tales of the Night is a charming break from the norm.