For a feature length debut, Jorge Dorado’s Mindscape is a well thought out and structured effort, a worthy addition to this new wave of European productions that have a distinctive American feel about them. Produced by Jaume Collet-Serra (Orphan, Unknown, Non-Stop), Dorado has had a good mentor along the way and Mindscape (AKA Anna) is an intriguing and fun final product. Starring Mark Strong, Brian Cox and Taissa Farmiga (who continues to wow audiences after her show stopping break in American Horror Story), Mindscape is about a group of intelligence agents called memory detectives. These are people who can enter others minds and memories; often to help diagnose psychological disorders but also when trying to find out about a crime that has been committed. Strong (in a very different role to that for which he is known) stars as John, a memory detective at the top of his league until his wife dies, his work decreases and soon he suffers a stroke whilst on the job. After some time away from work, he is called in by Sebastian (a wonderfully mysterious Cox) who instructs him to come back to work but on a small and simple job – that of the girl, Anna.

Anna (Farmiga, who by far steals the show) is a teenage girl who is on hunger strike – all John has to do is work out why and what can be done to bring this young and mysterious girl back to reality. It seems simple enough, at least according to Sebastian, who worked with the girl before when she was younger and is friends with her sketchy looking stepfather. John is instructed to look to her surface memories, but when he delves much deeper and sees things from Anna’s tumultuous past that he cannot ignore, John soon realises this could be the case that could end it all.

Whilst Mindscape sounds a little like Inception meets Minority Report; and even during viewing those remain with the audience – it is not necessarily a bad thing. Whilst Dorado’s film is certainly not as memorable or genre changing as either of those films, it certainly pays a serious homage to them. The turning point in the film and what keeps it different from those before it, is the discussion around the age of a memory – people do not necessarily remember things as they happened and over time they can change and evolve. Furthermore, Anna seems in control of what John sees and even has the ability to change the memory in her head – this confuses matters for John when he beings to realise that he is possibly being played.

The wonderful cat and mouse structure of Mindscape isn’t fully realised until about three quarters of the way though the film; John, like the audience has been played by Anna and yet he still wants to try and help 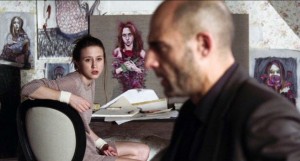 her because he believes that something or someone damaged her. So therefore the audience is still on side and believes that Anna can be helped, there is little reference to her playing around with the memories until later in the film.

The chemistry between Strong and Farmiga is great – they play subtly off of each other as neither can quite trust the other despite getting involved with some of the deepest and darkest recesses of the others lives. Farmiga in particular is just great as Anna and is easily the best thing about the whole film – she quietly moves across the screen and takes the audiences attention with her wherever she goes. In terms of the structure of Mindscape, it’s a wonderful metaphor for the memories that John is concerned with. The film, whilst quickly paced, moves from layer to layer without jolting the audience but taking them on this journey further and further below.

Mindscape is a fun, science fiction thriller, which although may not change the genre is certainly a worthy companion to other thrillers of the mind and is a great introduction to Dorado’s filmmaking.