Ask me what Post Tenebras Lux is about… go on, I dare you…

Good, because honestly it would make very little sense, if any, if I just told you what the latest film by Carlos Reygadas (Silent Light, Battle in Heaven) was actually about. Partly because Post Tenebras Lux needs to be seen to be believed, and partly because I don’t honestly think I understand it completely. But find me someone (apart from Reygadas) who can fully explain the ins and outs of a film, which translated means ‘light after darkness’.

Post Tenebras Lux concentrates on a family; Juan (Adolfo Jiménez Castro) and Natalia (Nathalia Acevedo) and their two children, Rut (played by the director’s own two year old daughter, Rut Reygadas) and Eleazar (played by Eleazar Reygadas). The film follows them throughout different points in their lives and although it may not play them in chronological order, by a certain point in the film you become quite comfortable in your knowledge of who is who and during, which timeframe the current action is taking place.

Interspersed with the moments of family life are other sequences and images, which in the great scheme of things mean something but appear to be 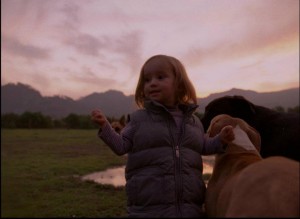 left massively down to interpretation. Take for example, the CGI size zero bodied devil, with the toolkit (sounds a little mad I know), who creeps softly through the house at two moments in the film. The devil almost acts like bookends for what truly is one of the most interesting and innovative films to come out of Mexico in the past decade. Is this devil in the minds of one of the children, or the adults, or is it really appearing when everyone is asleep and no one is around to confront it. Or is the devil, the director, the detail, the art? But maybe the devil doesn’t exist at all and the audience are being coerced into believing something completely different.

Another sequence motif, which is repeated throughout the film, is a rugby team in England. This could be, what Reygadas regards as the autobiographical moments, especially as he went to school in England. But perhaps it means something more – or it could just mean nothing, ultimately I think the audience really has to decipher for themselves its meaning.

The more we learn about the family throughout the film, we piece together their own inconsistencies, their weaknesses and faults. Their flaws come through; whether it’s beating a dog to death or arguing over the lack of sex in a relationship, the film seems to delve deeper and deeper in the darkness surrounding the family and begging the question to the audience; where is the light? I found the light throughout the film in the children, they were simply brilliant to watch. Never before have I found that the kids on screen are the most interesting things to watch. From the film’s very first sequence, when Rut is running around an open football pitch, with wild animals running across the field to them being shown as slightly older and interacting with their family, whilst the great grandmother hands advice and money out to the children, they appear to be the light. Their innocence and naiveté shines through, where their parents fight and bicker. 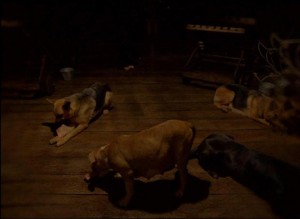 Reygadas has also manipulated a great deal of what the audience can see and therefore recognise in the film through the camera lens. Much of the film is through, what we would call a ‘fish eye’ lens, blurring the outer rim of the screen and just leaving the middle clear for the audience to view. I found this decision an interesting one; was Reygadas telling the audience where he wants them to be concentrating or perhaps he is blurring the edges to represent a blurring on the edges of life where things don’t always exist as they appear and that we can never plan the journey of life out fully, because there will always be something, which exists to get in the way.

What is indeed clear in Post Tenebras Lux is the themes and symbols used; Reygadas’ work includes representations of money, of sex, of family life but also the distance that can exist over time and the tensions between memory and dreams. There is no indication in Post Tenebras Lux, whether what we are watching is in fact true events, that happened to the characters. Due to the constant dreamlike state of the piece, one could be lead to believe the film is in fact an unconscious state of remembrance or completely made up of dreams – ultimately, I don’t think we will ever know. One particular sequence, which stood out as brilliant, is when Juan and Natalia go on what can only be described a sex holiday. They are surrounded many so many other naked men and women, all of whom like disheveled and disarrayed. They move from room to room, with names like Hegel and Duchamp and finally end up in a room, where a mass orgy begins. What is particularly interesting about these segments is that it reflects a later conversation between husband and wife, who argue about their lack of sex life. When Natalia complains of not feeling well and not wanting to have sex, Juan is quite happy to disregard what she has to say, and says that he will just have sex with her anally instead – as if this requires less effort from her. She goes from one extreme to another; from highly aroused and sexual to docile and uninterested and yet, in both the orgy and in conversation with her husband, she remains somewhat submissive to those around her.

It is safe to say that another large aspect of the film is the relationship between parents and children; and during these moments of tenderness and 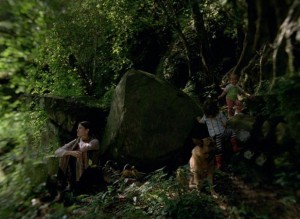 security, the heartstrings of the audience are truly pulled. Both the parents may have issues with each other, but I think their bigger issue is that they aren’t talking clearly to one another but when it comes to their children. they are quite confident and come together to prove that their children are the most important things in the world to them.

Post Tenebras Lux stands out as something unique, many will (and have) hated it and believe me, I am still trying to decide if I do or not but at this moment in time, I see it as a masterpiece raring to be seen and given a chance by an audience. Delicately moulded, succinctly portrayed and beautifully shot, Post Tenebras Lux, may not make many fans but it certainly is good representation of some of the strongest Mexican cinema to be released throughout the world.