‘Narrative art, as you well know, is dead. We’re mourning it.’

The exact circumstances of the death of outspoken, fiercely talented director, actor and poet Pier Paolo Pasolini remain unconfirmed, and no amount of artistic speculative inquiry can change that. Abel Ferrara – something of an heir to Pasolini in terms of the magnitude of his talent, the fastidiousness of his work, and the level of undeserved neglect and resentment redirected back at him by large parts of the receiving public – is smart to know this, spending little time in his portrait of Pasolini speculating about the great man’s death, instead devoting the majority to celebrating his life.

Using, not for the first time (also 4:44 Last Day on Earth, R’ Xmas and Bad Lieutenant) a last day countdown structure, Ferrara explores the breadth of a life by cutting a cross section of Pasolini’s last day. Contrasting various inconsequentialities from the fateful day against each other, Ferrara has produced a film made largely of small moments, a case study in finding beauty in the the ordinary and the ordinary in the beautiful. Whether showing a dinner with the actress Laura Betti (Maria de Medeiros), minor exchanges with his mother (Adriana Asti) and cousin Graziella (Giada Colagrande), or Pasolini (Willem Defoe) at work on his typewriter, Ferrara paints a picture in sedated, subtle movements. A film of shadows and silhouettes, gently fluctuating light adorns these interior scenes as Ferrara’s style of roaming camera pans and impressionistic, dissolve-heavy editing comes together to particularly gratifying, stimulating effect, Ferrara’s reverence lending a warmth and tenderness to his style that even his lighter films have not before shown. 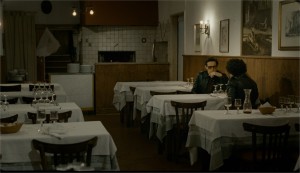 Not allowing the single day structure to confine him, Ferrara breaks from his portrait of Pasolini to explore also the work, cutting sporadically to his own re-enactment of a unfilmed Pasolini script. These excerpts, featuring Pasolini regular Ninetto Davoli, allow Ferrara to step away from the muted realism of Pasolini’s real life and into the more evocative wildness of his imagination, creatively externalising the internal, whilst also indulging Ferrara’s own, perhaps misguided, desire to part-adapt a Pasolini script. Following a scene where Pasolini states enigmatically to an interviewer, ‘there are no human bodies, there are only strange machines crashing into each other,’ Ferrara stages an orgy from the unmade film. A lavish, bravura sequence, the camera drifts around a moodily lit feast hall, before cutting back and forth between orgiastic revelry and erupting fireworks, offering a decidedly carnal counterpoint to the quotidian scenes of Pasolini’s off-screen life.

Defoe – cast more for his likeness to Pasolini and his long term working relationship with Ferrara, than his linguistic ability – struggles a little to convince sometimes, talking in Italian only in the film’s last act, addressing with perhaps appropriate discomfort, the young prostitute whom will initiate the sequence of events leading to his death. He is best when seen interacting with the interviewer, impassioned and prone to eloquent tirades; we see here the public face of Pasolini, a marked contrast to the muted, homely man seen in the rest of Ferrara’s scenarios. “We are all in danger,” he states emphatically, exasperated by what is plain to him but unseen by many, the totalising threat of an all-encompassing corporate-facism, disagreeable conflation of church and state, and an intolerant society. 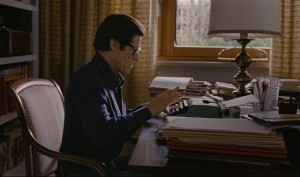 As the day draws to a close, and the imminence of Pasolini’s passing becomes unavoidable, after laying it on heavy with an extended, pointedly dark pre-death scene, Ferrara takes the viewer away from reality and modernity, and brilliantly undercuts the misery of premature mortality by placing it against something otherworldly and beautiful. Taking us back to his version of Pasolini’s last film, Ferrara takes a scene wherein the Devoli character walks up an unending staircase to space, seeking an non-existent material heaven but instead by pausing and looking back down, coming to appreciate the extant, liveable one he left behind on earth; and contrasts it against Pasolini’s death, parallel editing between the fantasy in the mind and the reality on earth. In reaching like this, Ferrara operates in a tone that could have become bathetic, but because of the avoidance of sentimentality to this point, feels poignant and importantly, earnt.

Pasolini is one of Ferrara’s most restrained films, and one of his most beautiful. Ferrara often holds a deep reverence for Pasolini, and this comes across in his filmmaking. In realising tenderly both the quiet moments in Pasolini’s everyday life and the more animated ones in his imagination and his works, Ferrara builds a fitting ode to the man’s life as well as his movies.