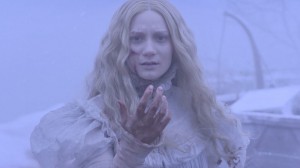 Guillermo del Toro’s vivid aptitude for horror infects each of his pictures, but his latest gothic extravaganza, Crimson Peak, might be his most direct engagement with the classic tropes of the genre yet. Nominally a haunted house story, the film tells a sort of twisted Jane Aust- sorry Edith (Mia Wasikowska), make that a Mary Shelley tale that, as our heroine declares of her own writing, is “not a ghost story; it’s a story with a ghost in it”. The events that happen to Edith are very much in line with her refusal to capitulate to her editor’s insistence that she include a romance. Romance does lie within, but it’s deeply twisted and macabre.

The crimson of the title is red clay, swelling above the ground to create a strange red carpet to welcome Edith to her strange new home. Wasikowska’s soft blonde hair and her light satin dresses are just the first of del Toro’s many bold, saturated contrasts, finding their opposite in Jessica Chastain’s raven hair and velvet, high-necked outfits, as Edith’s new sister-in-law bustles about, thick bunch of keys jangling at her hip. It is not exactly a contrast of acting styles, since everyone is performing on a register balanced precariously between theatrical and camp, but Wasikowska’s luminous, sharp presence is a bright counterpoint to Chastain’s majestically lurid villainy, in which even the exaggerated English vowels seem gleefully perfect. 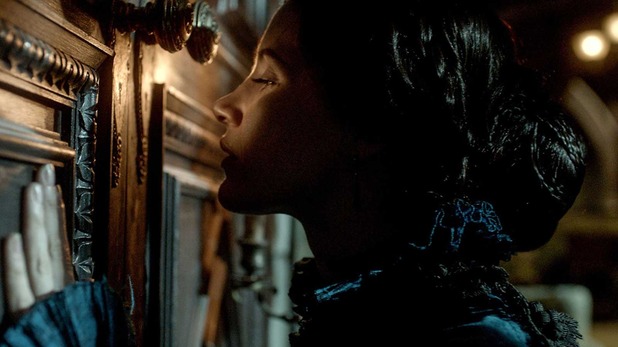 Unlike many modern horror directors, del Toro doesn’t rush into darkness, slowly burning through an introductory passage in Edith’s homeland America where he craftily unfurls equal amounts humour and suspicion. We begin (a seemingly required flashforward shot excepted) in Edith’s childhood, not long after her mother’s tragic death, with the immediate rule of ghosts as a reality in this world. And not the wispy, white sheet kind; no matter who the ghosts ape or what they want, they’re decomposing corpses reanimated with every horror curled in blackness. They’re very overtly CGI, but it’s of a beautiful quality, using the detail to really throw their gruesome appearance in the audience’s faces and confront them with the tragic melancholy of the afterlife. 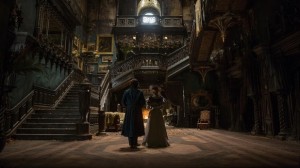 Edith is spirited away to the crumbling grandness of Allerdale Hall, atop Crimson Peak, by Baronet Thomas Sharpe (Tom Hiddleston). Outside of his smarmy villainy in the Marvel Universe, Hiddleston’s qualities seem harder to harness than his fanboyed contemporary Michael Fassbender, but they work perfectly for the wild excesses of the cinematic upholstery here, his pale, angular features by turns erotically charged and unnervingly duplicitous. Few could manage making a convincing romantic lead from such a morally suspect character, but Hiddleston’s peculiar charms manage it.

Thomas and Lucille cling desperately to the fading majesty of England, the mysterious bloodshed of their past literally seeming to rise up and submerge the crumbling ruins of their heritage. Go in expecting a ghost story, and you’ll find ghosts who aren’t here to tell them; go in expecting a romance, and you’ll find Edith’s pen crossing it out. Take the title literally: Crimson Peak’s heights are vivid red, flashes of colour and rich performance style that are all dazzling to witness, and trying to find something beneath will only submerge you deeper in the squelch of del Toro’s delirious production.

Crimson Peak is in cinemas now.