What should Oblivion be? On that budget, with that cast and that hype, it should have become one of the best science fiction films in recent years, and many thought it had the shaping to become a cult classic but alas, it is anything but unfortunately. The Tom Cruise star vehicle has been going a little too long now, it no longer means what is once did and after one too many flops, it appears that perhaps his train is stopping at Joseph Kosinski’s (Tron: Legacy) station, and that is the busy, beautiful, frenzied and somewhat boring Oblivion.

Summed up, Oblivion follows Cruise’s character, Jack Harper, a former marine commander who now (in a post-apocalyptic futuristic Earth) is a glorified Wall-E type character, who flies busily around ensuring that the drones are doing their job of trawling for Scavengers and makes sure that the rest of the Earth’s resources are being collected successfully to be used elsewhere. Apparently, we are lead to believe that the Scavengers launched war upon the Earth, by destroying our moon. This meant that the Earth became uninhabitable, and the humans have had to go and live on one of Saturn’s moons (I hear they have better weather than we do). Jack has just two weeks left, along with his mission partner and lover, Victoria, played Andrea Riseborough, to make sure everything is working correctly before leaving the Earth for good.

Have you kept up so far? Good.

The story gets deeper when Jack tells the audience, that years before he had had a memory wipe in order to prevent giving intel away to enemies, who could be anywhere and yet he is plagued by vivid, sepia tinged dreams about standing at the Empire State Building, and looking through binoculars with a woman. Who is this woman? Is this a dream, or a memory trying to latch itself back into Jack’s brain? Whilst out one day on a clean up, he rescues a human survivor from a crash and she looks just the woman in his dreams. We find out this is Julia (Olga Kurylenko) who stirs emotions for Jack, and it turns out she is something much more important to him that he could ever realise.

Throw in some twists along the way; Morgan Freeman revealing a conspiracy theory, which reveals that this story of the 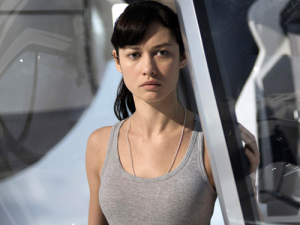 destruction on Earth may not actually be true and add a sprinkle of Alien themed ‘Mother’ to proceedings and you have a truly confused, film, which has picked up elements of very similar films along the way without saying anything interesting or new.

The performances in Oblivion range from brilliant to anything but. Starting off with Cruise, who seems to be enjoying saying the name Jack just a little too much after Jack Reacher. Unfortunately, he just seems to be on auto-pilot in this film, his face doesn’t move and he doesn’t elicit much emotion despite the fact that his character goes through quite a lot in the film. As Bruce Willis has been doing for a while now, Cruise is simply playing himself. It is becoming harder and harder to distinguish between the man in the gossip columns and that in the movies – because neither seem interested in trying hard anymore. The Jack in this film is boring, unimaginative and lacks the humanity, which this films sets the characters out to embody from the very start. He says his lines perfectly well, but it seems he believes less in the script than the audience who will have to sit through it. Even watching him interact with any of his co-stars didn’t alleviate matters because he no longer has chemistry with them, that dynamic left long ago.

Olga Kurylenko, personally, was just as unanimated and uninteresting as Cruise, perhaps this is why they were coupled together? She spends the vast majority of the film either shouting weakly or making faces somewhat similar to Munch’s The Scream. She is annoyed at this, or confused at that, and never for one moment did I wonder about the character, or her connection with Jack Harper. The biggest waste of the film was Morgan Freeman, who although far outpowers practically anyone else in his scenes, they are few and far between. He hardly ever appears, and just when you think he is going to do something, he is shot down. He is underused, and doesn’t even portray a full supporting character; unfortunately, he is more like a weak plot device to reveal something and if we know anything, it’s that Freeman can do far more than this role requires of him. 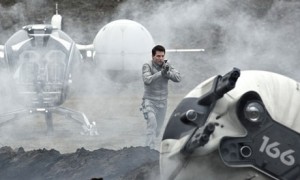 But it’s not all doom and gloom, and there is light at the end of the acting tunnel in this film. This appears, in part, in the form of Andrea Riseborough, who plays Victoria. At the start of the film, you think she is the perfect co-worker and lover. She does everything on time, looks amazing on screen and tries so hard at creating some sort of chemistry with Cruise. She drapes herself lovingly over him and her smile illuminates the entire screen. She was made for the IMAX screen. Victoria is simply caught up in the mess of the world, but she doesn’t blame anyone for her issues. She gets on with the mission she has been given and looks forward to the end of the two weeks left on the remnants of Earth, so she can be with all the other humans. When Jack reveals the big conspiracy, I actually felt worse for Victoria, because she doesn’t ask to be part of this big plot and meets a sticky ending, when she believes a little too much. She distances herself from Jack, when he thinks he is figuring out the truth and turns to the conspiracy, which is controlling her. In the end, it will get her.

The other supporting actress, Melissa Leo, plays Sally, the agent who is apparently with the rest of the humans. She comes online each day to help the pair out and ensure they are safe and well. She monitors their relationship and informs them if their mission changes. She is this film’s equivalent of ‘MOTHER’ and just as frightening. What no one expects, is when Sally turns out to be a giant cube… I’m not even going to bother explaining… watch the film. She is dark, sinister and illuminating every time she is on screen. She scared the daylights out of me, and that was simply because of the control she had over all the characters and everything, which happens on Earth – surely something isn’t right!??

If you are going to watch this film, you have to see it in IMAX, because the imagery really was certainly beautiful and imaginative. The huge great landscapes of the desolate Earth do look amazing on screen and Kosinski has created an Earth, which looks so different to ours in reality and yet has moments of recognition, that you have to admire the work he has done. There were moments when the CGI was too overused, making the scenes look very fake and green screen based, but even those you tend to forgive when you are looking over this white, innocent looking garbage pile that Earth has become. The moments in space are also stunning, creating deep imagery, and reminding the audience that they are simply something small in the vast expanse of everything else.

The saving grace for the film, and certainly the reason it got three, rather than two stars is the magnificent soundtrack from

M83, who co-wrote with composers, Joseph Trapanese and Anthony Gonzales. The easy on the ears Vangelis style rock, electronic opera is simply the best thing about the film. It is provocative, entertaining and actually, extremely emotionally compelling. I was pulled in by the music, which fits with the various noises of the film and creates far more visual space on screen by creating some sort of extra layer to the world that this story takes place. The title song, ‘Oblivion’ by M83 featuring Susanne Sundfør, lifts the spirits of the audience.

Oblivion is long winded, and doesn’t need a second watch. Even if you miss anything out, by the end you don’t really care. It’s a pretty much Hollywood affair, with a happy ending, which made me even more angry. I will give the film credit for some of the performances, the music and for the way it looked, which meant it wasn’t an entire failure. But as for something with longevity – this just doesn’t have it.