When Ma (Brie Larson) rolls Jack (Jacob Tremblay) up in Rug, preparing him for the daring escape from Room, she doesn’t tremble. Her own hopes are wrapped up with Jack in that rug, but also the risk of never seeing her son or the outside world ever again. Her life, stripped away as a teenager when Old Nick (Sean Bridgers) enticed her into a car and locked her in a small shed in his back garden, is one you’d expect to be without hope, but Ma has astonishing resilience. 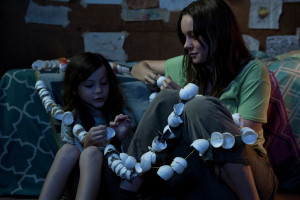 Room’s half-and-half split between the close quarters of Room and the vast outside world is tensely bridged by the escape sequence, which is as sharply constructed as any other action scene you’re likely to come across this year; this is real heart-in-mouth, stop breathing stuff, and very effectively serves to break both Jack and the audience out of the psychological box of the time we’ve spent in Room. Emma Donoghue, adapting her own novel, adopts Jack’s point-of-view throughout, and Jacob Tremblay gives an astonishing performance that feels emotionally complex and completely unprecocious.

He’s complemented superbly by the Oscar-nominated Larson, reaffirming her natural ease with child performers after her raw turn in Short Term 12, and establishing herself as one of the boldest actors of her generation with an exceptionally skilled performance that she strips back with astonishing emotional clarity. Ma’s existence is filtered through Jack’s eye, so Larson cannot interiorize her struggle, but also can’t externalize due to Ma’s protectiveness of her son and the film’s distance from her. For much of the film, Ma is more emblematic of a woman in tragic conditions, yet Larson makes her a full, sympathetic, powerfully desperate character. 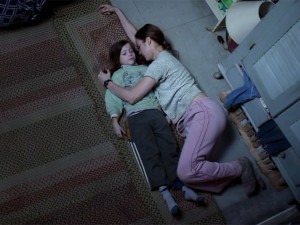 What Room really aces is how the narrow psychological walls of the square shed limit what both Ma and Jack can really comprehend, on their differing levels. Once it leaves that pressure cooker, it smudges awkwardly into more generic territory, with breakdowns in kitchens and cautiously intimate cinematography, but it remains compelling due to Tremblay’s impeccable, instinctive negotiation of his character’s shift and the addition of Joan Allen and Tom McCamus as Ma’s mother and step-father, who do their best to create a nurturing environment for their grandson. Ma’s noted disappearance for a stretch of the narrative leaves important room for Jack to experience life without her for the first time – and Larson’s return in the film’s most powerful scene is truly worth the wait.

Room’s premise doesn’t suggest a film as compulsively gripping and ultimately uplifting as it proves to be. The patriarchal violence suffered by the characters is a necessary window onto a world that continues to allow these events to occur and to be exploited by the media, and does so with a great deal of grace, and emotional and social insight. If you’re put off by the subject matter, it’s probably all the more important for you to confront that fear and enter Room.

Room is in cinemas from Friday 15 January.