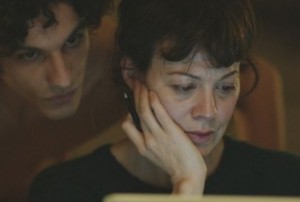 Treading the line carefully between an erotic drama and conspiracy thriller, Flying Blind luxuriates in a multilayered story, in beautifully filmed locations and acted by two hugely powerful and provocative leads. Kasia Klimkiewicz’s first feature follows Frankie, played by the incredibly talented Helen McCrory, a high level member of staff in the aerospace industry, designing drones for use in military strikes. Frankie is a forty something, independent, single woman, who remains very much in control of her own life. She also teaches at a local college about engineering and design. Whilst teaching one day, she meets the mysteriously dashing Kahil, played by the Algerian born Najib Oudghiri, and they start an intense sexual relationship, which very quickly forces Frankie to reconsider everything she has ever thought about her own, white, middle-class existence, her life at work and the entire world around her.

When people start to talk, Frankie’s suspicions rise and she is no longer sure whether she can trust the man she has fallen in love with.

Flying Blind works on so many levels, and once you have recognised that, you start to see how powerful and interesting this 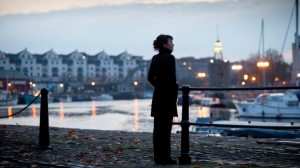 film really is. To start with, I would like to look at the storyline between the older woman and the younger man. Sure, we have seen this before with films like The Graduate, which started an entire genre of these sexual dramas, and yet Flying Blind cleverly goes further to question the chemistry behind the relationship, rather than focusing on the base sexual instincts. Frankie is a working woman, she lives alone and is damn successful at what she does, she certainly doesn’t look as if she lacks in her life. She even has some sort of sexual chemistry with her co-worker, Robert (Tristan Gemmill) as he rubs closely by her; Klimkiewicz is just making the point that even though she is older, she still has a sex life and still can get the attention of other men. Furthermore, she doesn’t use Kahil just for sex but instead becomes emotionally involved with him; she even tries to help him when she finds out he is an illegal in this country.

Furthermore, in our post 9/11 world, where we are more aware of terrorism than ever before, Flying Blind, adds an entire new level by alluding to a possible history in Kahil’s life and that he may be involved with the wrong people. But, like Frankie, the audience are made to constantly question themselves, because it may just be down to the stereotype, which we have come to know that makes us make those connections. The film is very careful to balance out between making Kahil the victim or the terrorist. Sure, there are plenty of points where Flying Blind is aiding the audience in coming to the conclusion that he is planning something, but then at other times, we are forced to rethink this over. Perhaps he is just at the wrong place at the wrong time. 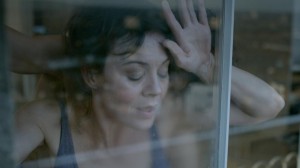 The issue with Kahil, which is communicated to us, is his vast sense of alienation, which he feels from those he lives around. The film is quick to suggest that down the road could be a white family, who can live a perfectly ‘normal’ life, without the worry of being suspected or coming from a part of the world, which is crumbling under all types of pressure. This is interesting as Klimkiewicz is from Poland herself, and therefore she seems to place some of herself in her character. She, like Kahil, comes from a world, which is very different to the one we live in this country and yet we all live together… but history and the past certainly does leave its scars.

Performance wise, both McCrory and Oudghiri, dominate the screen and neither out play each other, which could have been a worry by having a big British star and a virtual unknown. They play off each other in their scenes, from the loving ones, to the ones where they argue. McCrory is thrilling and sexual on screen, which is amazing to see as so few older actresses play this role these days. It seems that once women get to a certain age in the cinema, they are relegated to playing stereotypical roles like the doting mother, but what about the aroused woman who still needs and breathes like the rest of us? McCrory is careful to present each of those subtle nuances to the audience, without them being overbearing. She is beautiful to watch, and illuminates every scene she is in. Equally excellent is Oudghiri, who portrays Kahil with enough respect to ensure that the audience don’t instantly align him with a stereotype. He is softly spoken, sexy and mysterious, which I think adds to his charm. 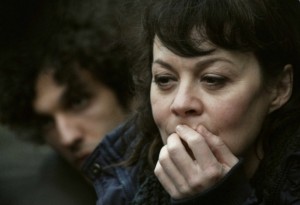 thriller, where (usually) the female loses control and lets loose, Flying Blind, was a wonderful addition, which expertly subverts all expectations of the genre. With the drama of Fatal Attraction, and the suspense of Basic Instinct, Flying Blind cleverly allows the sexuality of the characters to be fully explored without it becoming exploitative or illusionary. Furthermore, the film is also very aware of its conspiracy element, which runs parallel to the romance storyline. Red herrings are thrown from each and every side, with Frankie not knowing exactly who Kahil is but I think this is part of the attraction at the end of the day. The script illuminates all the little quirks of the characters, and is so emotionally compelling that you feel Frankie’s confusion throughout, as well as Kahil’s alienation. You want them to work so badly, and the stunning finale rips you up so much.

The film itself is visually interesting and beautiful to look at; I just want to take a moment to admire one particular sequence where Frankie is in the wind tunnel and lets herself go, both metaphorically and physically. This reminded me of one of those scenes in films, where characters go to the middle of nowhere and scream as loud as they can. Frankie has bottled up her emotions for so long, that she isn’t sure what to do, now that someone has come along and let them out. Her balance between work and emotion has broken and so she stands in the wind tunnels and allows everything to come over her as she tries to expel herself free of it.

As you can see, I was a big fan of Flying Blind and the many messages that it is trying to portray. It’s a very strong first feature, beautifully shot and intelligently acted. It marks Klimkiewicz as a filmmaker to look out for in the future, and is really worth a watch.