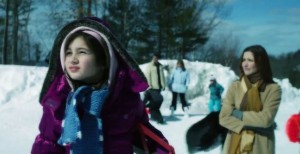 Joss Whedon has announced that his new movie is available to rent online now for just $5.

Appearing at the premiere at New York’s Tribeca Film Festival in a post-credit video message he revealed that In Your Eyes, which he wrote and executive produced – was available to watch worldwide immediately.

“It’s not just the world premiere of the film,” he revealed. “It’s the worldwide release date, because as of now, In Your Eyes is available on any internet-capable device… This is exciting for us because it means we get to explore yet another form of distribution – and we get $5.”

Starring Zoe Kazan and Michael Stahl-David, In Your Eyes was directed by Brin Hill.

Find out more at http://inyoureyesmovie.com