To The Wonder DVD Review 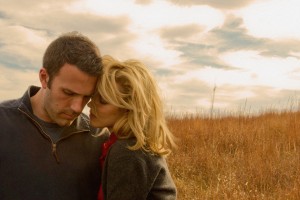 Terrence Malick returns from 2011’s The Tree of Life with To The Wonder starring Ben Affleck, Olga Kurylenko, Rachel McAdams and Javier Bardem. As a celebrated auteur, Malick has become known for some of the most beautiful poetic imagery in contemporary cinema. Yet To The Wonder seems to fall flat because to keep the audience interested there has to be more than pretty images, the storyline needs to be intriguing and the characters need to say more than three lines each.

The film begins its focus on the relationship between the American, Neil (a frankly underused and horrendously boring Affleck) and Kurylenko’s character, Marina, a European single mother living in Paris. They become close and though a variety of sequences Malick sets them up as discovering the world together. When Neil finds himself wanting to stay with Marina and her daughter, Tatiana, he asks them to come to the USA with him. Their relationship gradually hits hard times and Tatiana finds it difficult to live in the USA without her friends. Marina starts to find solace in a local religious figure, Father Quintana (Bardem), who himself is undergoing a crisis of faith. Marina decides to move back to France with her daughter and away from the man she appears to have fallen in love with. At this point Neil starts to rekindle a relationship with an old friend, Jane (the most unimportant character of the year, played by McAdams). They decide to move to her farm together to try and clear her debts. Meanwhile Marina starts to find herself in crisis, gives up her daughter and returns to America. Jane and Neil’s relationship, guess what, fails. He marries Marina and yet again, they have more issues. She once again returns to Quintana, who doesn’t seem to do much. She has an affair, Neil divorces her and the film reaches its best part, the end.

There were numerous issues with To The Wonder; if you intend to set up a romantic storyline, something so inherently based in the emotions of 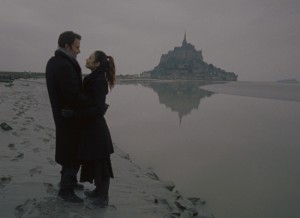 the characters, then the audience really ought to feel as if they can understand what is going on in the film and sympathise with the characters on screen. Malick has achieved something pretty great in this film, for he has created the ultimate in audience alienation and boredom. Whilst his latest contains an all star cast, he appears to be heavily interested in Kurylenko’s character, Marina, who spends the vast majority of the film flouncing around the screen and dancing in the middle of fields. Whilst the film is truly beautiful, there is little much else. The dialogue is sparse and when it is finally used, it tries to dig deep; Marina’s long monologues about love and life could have been so lovely and fair and worked to really get under the skin of the audience but they fail when there is no attachment to the characters on screen or the story that is happening.

Furthermore Malick really does grasp at straws to try and make anything that happens in To The Wonder actually matter. Whilst he never does really address why Marina comes back, he never delves any deeper into her psyche about giving up her daughter and the repercussions of it, instead he wants to watch her float about in stunning landscapes. Neil and Jane’s relationship, for instance, bears no interest for the audience and no ramifications for the rest of the film. It is almost as if Malick is trying to compare Jane with Marina and if both characters were anymore then two dimensional Malickies, he could have hit something pretty interesting but Neil’s relationship with both fail and the audience are no more illuminated about why. Unfortunately even performance wise it is difficult to try and compare Kurylenko with McAdams, both of whom seem as if they are trying harder than really the film deserves. This is rather different to Affleck who ultimately, isn’t too sure what he is doing on screen and nor does the audience. Finally Bardem’s character, Father Quintana, is the only character who really is going through some sort of interesting crisis; that of his faith. Whilst his performance is possibly the best thing about the film, it isn’t enough to save it. The final chapters of the film concentrate of him and the people that he meets; apparently we concentrate on his journey because Neil is shown to change in life because of Quintana’s work but really it is very easy to lose interest in him. 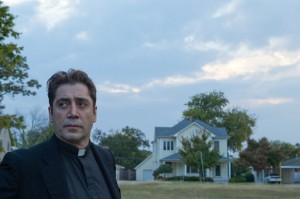 What is most interesting is that Malick’s film is really, really beautiful; the colour and the rhythm is captivating and all consuming but it simply doesn’t match the narrative – that is the biggest failure of the film. As the story is meant to be so filled with drama, it really does call on the audience to be fully invested in the story and therefore the beauty of what is one screen, but ultimately the best thing about To The Wonder is forgotten. If Malick had simply called a little more on the story and less so on the poetic imagery, this could be a little more successful.

To The Wonder is the film to put you to sleep, forget the sleeping tablets, Malick has provided. Whilst it is one of the most beautiful films to have come out in a long time, showcasing the sheer mastery of Malick’s filmmaking and understanding of imagery, it is also tells one of the most boring and uninvesting stories in a long time. It is more important to think about the direction and cinematography, rather than the poor storytelling or the monotonous acting because the latter really won’t sell this film.