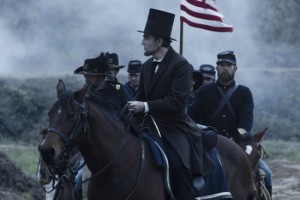 If two films constitute a trend, then I think it’s fair to say that there’s currently a trend for dull films about old American presidents. These films are: Hyde Park on Hudson and Lincoln. I happened to watch both of these films in one day, demonstrating the kind of stoicism that ought to earn me a presidential term. But, since the running theme is democracy, first I’ll have to do my best to be diplomatic…

Nominated for 12 Academy Awards, 7 Golden Globes and 11 Baftas, Lincoln is Steven Spielberg’s much-anticipated and critically acclaimed look at the final four months of the 16th President of America, Abraham Lincoln’s life. Set in 1865, the film follows Lincoln (Daniel Day-Lewis) as he fights to have the Thirteenth Amendment passed, abolishing slavery before the end of the American Civil War. It is essentially a race against the clock (for complicated political reasons that I don’t understand) all the while Lincoln grappling with his conscience as, the longer the war goes on, the more innocent lives are lost.

The film’s opening shots are misleading; a visceral Civil War battle scene, with soldiers bent double, like old beggars under sacks, knock-kneed, coughing like hags, (what do you mean, “I stole that from a poem”?) anyone would think that they were in for a war epic. Instead, Lincoln is better described as a character study framed within a political-historical courtroom drama (a catchy new genre that I have coined). There is also a bit of melodrama thrown into the mix, Tony Kushner’s screenplay casting a speculative eye on the taught relationship between Lincoln and his wife, Mary Todd Lincoln, (Sally Field) after the death of their third child, Willie.

Set, costumes and cinematography are immaculate, uncompromisingly transposing you into 19th Century America. And we’d 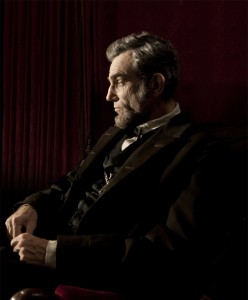 expect no less from Steven Spielberg, Janusz Kaminski and a whacking great budget. Trouble is, dark, claustrophobic interior shots will leave you gagging for a nurofen; even most of the battle scenes look like they were shot indoors. The film’s palette is “earthy” to say the least, the White House occasionally appearing like an effervescent space ship, and the blue-white-reds of the American flag like some kind of Technicolor oddity. Luckily, the old-school orchestral score expands the scale and lightens the tone, invigorating gloomy shots with a touch of almost camp Classic Hollywood grandeur.

The casting causes me an inner turmoil probably akin to Lincoln’s; who am I more attracted to, Daniel Day Lewis as Lincoln- my“reverse Oedipal sexy father figure” crush, or Joseph Gordon Levitt as Lincoln’s son Robert, my “I can’t even tell if you’re good looking or not but I like you anyway” crush? Day-Lewis is mind-blowingly convincing as Honest Abe (not that I knew the guy), his bowed stature, nuanced expressions and vocal idiosyncrasies are subtle, and it works. Overall, his Lincoln is every bit the country lawyer, gifted orator, and dutiful family man, never faltering in credibility. Could this be a third Oscar for Day-Lewis?

Sally Field’s support is strong, and she is suitably naggy and irritating as Mary Todd, while Tommy Lee Jones as Thaddeus Stevens (GREAT NAME but no idea who that is) provides a wonderfully layered characterisation, and solicits a few surprise “laugh out louds” from the stalls. The ensemble cast is comprised of semi-recognisable actors further disguised by beards and sideburns, but eventually decipherable as; David Strathairn, Hal Holbrook, James Spader, and Bruce McGill. All veterans, say no more. Despite the very occasional moment when someone reads their lines like a sixth former reading out Shakespeare, unsure of where to place the emphasis (probably cause they didn’t know what was going on, I know I often didn’t), the acting in Lincoln is the film’s foremost selling point. 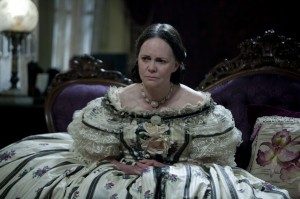 With this kind of movie (/Americanism), I feel like there’s always a risk of writing your historical protagonist, revered and idolised over time, as either cardboard flat or implausibly brilliant. If you’ve ever seen that other movie about Lincoln, John Ford’s 1938 “Young Mr Lincoln”, which posits the cheery young lawyer in a kind of John Grisham-esque legal scenario and merrily righting others’ wrongs, you’ll know what I mean. But we’ll forgive it its time. Thankfully, our recent Lincoln is portrayed as infinitely more rounded and dimensional as a character. Although, that’s not to say both films don’t feel a little propagandistic… British audiences, expect to cringe. American audiences, expect to cringe more because you’re basically complicit.

That said, Lincoln delves into micro-politics as much as macro-politics, capitalising on its 150 minutes (I know- don’t even go there) to examine the moral compasses of its characters and the corrupt inner workings of Congress, and for that it feels both thorough and modern (see: The West Wing), but not thoroughly modern. The script is too talky and bulky; there’s so much legislative vocabulary in there that you’re bound to get lost, if not fall asleep, somewhere along the way. Lincoln was never intended as an action film, it does what it says on the tin and provides a considered study of events in 1865. If you go in knowing what to expect, I’m sure you’ll enjoy it. Just don’t forget the nurofen.