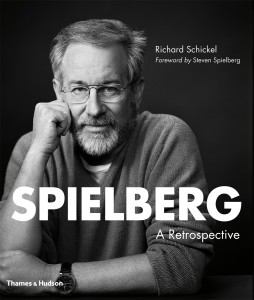 Richard Schickel‘s opus of Steven Spielberg’s many works is akin to the man himself; simply impossible to pigeon-hole. Throughout its considerable length, Spielberg: a Retrospective is loaded with astute critical commentary, yet continually dips into to nostalgic fandom. Schickel, who describes Spielberg as “likeable and who’s work… I find astonishing”, wisely trims his focus only on the directorial efforts of the evergreen auteur, omitting his volumes of work as a successful producer. Whilst this sadly means that there is no room for the likes of Super 8, Back to the Future or the phenomenal HBO mini-series Band of Brothers; it also spares the reader from revisiting Transformers: Revenge of the Fallen

Beginning with the vehicular mayhem of 1971’s Duel, each of Spielberg’s twenty-seven movies (pre Lincoln) get their own in-depth profile. The author provides scores of original interviews with Spielberg and a wealth of behind-the-scenes photography. With every chapter, the conceptual journey is charted from inception to release, all from unique and solitary viewpoint of the director’s chair. Great precedent is placed upon Spielberg’s personal drive and passion for each project and it’s greater contextual meaning: although this may be self-evident in the grander examples such as Schindler’s List or Saving Private Ryan, this reading brings a fresh perspective and renewed respect to the less analysed popcorn movies like Hook and The Adventures of Tintin. Within every passage, Schickel emphasises his admiration of Spielberg’s contribution to cinema and popular culture as a whole: However Schickel is overly critical of the directors more recent work. One gets the impression that experience should breed maturity and perfection. This demanding critique sees War of the Worlds, AI and Minority Report feel the sharper end of Schickel’s spear.

Fans and critics alike will both find an involving read here. Schickel provides a balanced, and thoroughly enjoyable, career map of the most famous director of all time. Thanks to the extraordinary volume of original interviews, even the most fanatical admirer can dive into fresh waters. With Spielberg providing us with some of the most important and immortal blockbusters of all time, films such as Jaws, Close Encounters of the Third Kind, Jurassic Park and E.T to name but a few, this is a fantastic cinematic time-capsule and an essential read for movie buffs