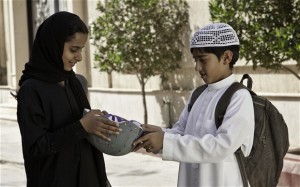 In unfolding from the viewpoint of its eponymous protagonist, Wadjda is a double-edged sword: on the one hand it wishes to demonstrate a valid scepticism towards the casual patriarchy and religious customs through which Saudi Arabian women are oppressed, while on the other, in wanting and perhaps needing to be as accessible as possible, it courts the familiar tropes and structure of a coming-of-age tale. Its unique selling point, as such, is its country of origin and the fact that its debutante director, Haifaa al-Mansour, is a woman. Two not insignificant points of note heighten her achievement: not only is it illegal for women to direct films in Saudi Arabia, but film theatres have been banned there for three decades.

The film itself is charming in its own way while never quite straying beyond trodden terrain. At its centre, eleven-year-old Wadjda (Waad Mohammed) is a mischievous tomboy whose current ambition is both simple and unthinkable: to buy a bicycle so that she can race her friend Abdullah (Abdullrahman Al Gohani). Undeterred by the adults in her life who repeatedly advise that bicycles aren’t for girls, Wadjda begins to save up money by making and selling bracelets at school, and by swindling cash from friends in payment for favours (one such swindle is in return for her to stop crying). Both Wadjda and the young performer playing her are radiant and resilient, and al-Mansour is refreshingly upbeat in her dramatisation of societal oppression. Established order is brought into question in an unhysterical manner: the same authority figures who deny Wadjda a bicycle also warn her and fellow pupils that they’re not to directly touch the Koran during their period. The more absurd superstitions draw attention here to the abhorrent gender politics taken for granted every day.

When Wadjda’s would-be entrepreneurialism is found out, she enters a school competition that offers a cash prize to the student most knowledgeable about the Koran, and who can best recite its verses. To aid her task, Wadjda joins a class dedicated to studying its scripture, and buys an interactive game titled Learn the Quran the Easy Way. As she progresses, the film begins to skirt a triumph-over-adversity arc, at once accessible and restricting – though in place of a noble quest we have Wadjda’s bracing ulterior motives. In this respect, Waad Mohammed’s performance tempers the film’s banal premise with an upstartish vigour: one suspects that her aspirations to attain a bicycle are less to do with being a spoilt child of middle-class parents than they are a search for simple thrills in a life wherein Adventure is an All-Boy’s Club.

Two female figures of influence loom large for Wadjda. One is her mother (Reem Abdullah), who is coming to terms with the realisation that her husband is about to marry his second wife. The other is Ms. Hussa (Ahd Kamel), her pedantic head teacher who recalls One Flew Over the Cuckoo’s Nest’s monstrous Nurse Ratched. Both women are as taken aback by Wadjda’s sudden desire to learn as they are finally won over by it. In preparation for the school competition, Wadjda’s mother advises that when reciting verse, “the words have to come from your heart”. If such corny lines cue the film’s overall sense of inevitability, though, al-Mansour balances them against a bittersweet tone: Ms. Hussa is outraged to finally discover Wadjda’s intention is to spend any prize money on a bicycle, while Wadjda’s mother congratulates her daughter beneath fireworks whose origin is an unwelcome wedding ceremony on the other side of town…

‘Wadjda’ is part of the London Film Festival’s ‘First Feature Competition’ and screens on Thursday 11th and Sunday 14th October.