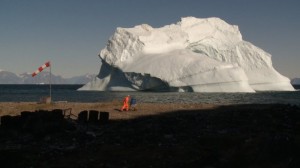 The village to which Village at the End of the World refers is Niaqornat, North Greenland, whose resilient population’s survival is suddenly under threat when the fish factory on which its livelihood depends is closed due to the decreasing profitability of halibut sales. This documentary is an accessible account of the inhabitants’ efforts to retain the factory in the face of budgetary cuts and diminishing subsidies.

Unfolding as a “year in the life of” diary, Village at the End of the World uses seasonal changes as its structuring principle, recalling Être et avoir (2002), with which it also shares an absence of voice-over – though, unlike that film, there are recurrent interviews here, with a quintet of principals through whom we learn of Niaqornat’s daily routine and the contexts (geographical, industrial, economic, etc.) informing it: Ane, who at 76 is the village’s oldest inhabitant; Lars, the 16-year-old who wants to move away to university; Karl, the huntsman who may or may not be Lars’ father; Mathias, the village’s school teacher; and Ilanngauq, the refuse and sewage collector to whom others refer as “the village clock”. Operating by such routine methods allows the film to exposit and shape its material in an informative and approachable manner; it works best as an introductory overview, and as such is not without its problems, though its 78-minute running time is suitably slim for a documentary on a village whose inhabitants number a mere 59.

There’s a sense of untouched earth at work here, of an innocence removed from but not immune to the bigger machine of capitalism. A conscious resistance to an economic base built upon profitability whatever the cost is apparent, and director Sarah Gavron (who, having adapted Monica Ali’s novel Brick Lane in 2007, is delving into documentary for the first time) looks for differences between “their life” and her own even when social mutations have already affected the former. Some of these differences emerge naturally, as in when one interviewee tells us that the meat they receive from local hunters is often given to them for free, while the inherited survivalism that drives one generation after another is in stark contrast to the for-profit production of meat by “our” capitalist economy. (Ane tells us that Brigitte Bardot, who endorsed campaigns against whale hunting, is “not that popular around here”.)

Despite this endurance, there are signs that Niaqornat has already begun to be drawn into a global market whose driving forces are indifferent if not hostile to the villagers’ survival. While the fish factory remains inactive, inhabitants embrace their nascent tourism industry, enjoying annual visits from a Danish cruise ship. When a passenger from the latter speaks to camera about not wanting modern buildings to be built in Niaqornat, about the importance of it retaining its unique sense of identity, there’s an unfussy irony present, given what we have previously learned: Lars, for instance, listens to local hip hop music whose lyrics reference suicide (which has, we are told, increased in recent years), while his hooded sweatshirt prompts the interviewer to ask if he is a “hoodie… people are scared of them in England.” This latter moment comes off as forced, though, as if the makers are too keen to gild the sense of untouched provinciality that pervades Niaqornat, which fetches up some limitations or pitfalls with regard to an outsider’s vantage point.

In a place as remote as this, life’s simpler pleasures and needs are heightened by their absence. Energising the frame with his infectious smile, Lars prepares to move away to university in pursuit not only of an education, but also of girls. Packing his bag, he is conquered by embarrassment; the camera operator agrees to turn away, and the subsequent, off-screen dialogue implies a reference to condoms. This is only one of many such moments in Gavron’s quietly observed documentary (the film’s funniest moment comes after the end credits). Since its resolution also implies some uncertainty, though, the extent to which this community can continue as some untarnished triumph of “collectivism in one country”, to paraphrase marxist rhetoric, is very much in doubt.

‘Village at the End of the World’ was part of the London Film Festival’s ‘Documentary Competition’.