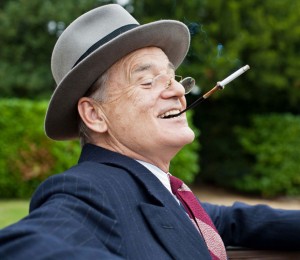 From the director of Notting Hill comes Hyde Park On Hudson, which at essence is the story of President Franklin D. Roosevelt’s indiscretions during his marriage, as well as featuring a side storyline to do with that World War thing (you know what I am talking about). Starring Bill Murray as the President and the subtly stunning Laura Linney as Margaret ‘Daisy’ Suckley (a distant cousin of Roosevelt), Hyde Park looks at the growing relationship between the cousins and what happens when it turns from a friendship into an affair. Also starring Olivia Williams as his long-suffering wife, Eleanor and Olivia Colman and Samuel West (doing his best David Walliams impression) as Queen Elizabeth and King George VI – the cast certainly have a lot to live up to, coming from different paths themselves, from drama to comedy and everything in-between but also with the recent resurgence in historical drama, especially with The King’s Speech, which features the same King and Queen, during the same point in their lives.

The film is narrated by Linney’s character, Daisy, who receives a mysterious phone call from the President’s mother requesting that she come and entertain him, or even nurse him back to health, as he has a terrible sinus infection (something which is used briefly as a way to cause tension between the women in Roosevelt’s life, but is quickly dropped afterwards). Once the pair start an intense friendship together, the audience start to realise that something more is wanted by the President, something which comes to light in quite an uncomfortable scene in a lavender field.  Watching Murray interact with Linney, at times is flattering, like a daughter to a father but much more of the intense emotional connection between the two is somewhat difficult to completely immerse yourself within, because he does look a lot older than her.

Putting aside age differences, the narrative continues and I was reminded of Barnes’ writing in last years The Sense of an Ending, where he postulates that memory is somewhat manipulated and changed from what may have originally happened. Although I wasn’t watching Hyde Park for it’s historical accuracy, I was constantly questioning the methods of each of the characters and whether what was being said, actually happened.

A story, which, occurs in the second of the three acts of the film is the arrival of the King and Queen of England. Something, 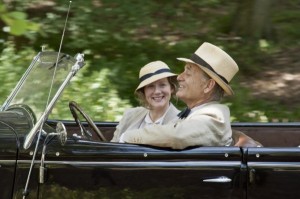 which brings the President a lot stress and therefore requires him to relax (if you get my sentiment) and causes a lot of friction throughout the household on Hudson. On arrival, you forget that the director has made some of the biggest British films of the last decade as Colman and West are subjected to comedic side comment and I felt that they were really being taken the piss out off. The couple step out of their car to wave at a man going by on a tractor, the pair are ignored and many of their opening scenes are simply played out for comedic or snobbish value.

What I do have to admit, is that both Colman and West, are a brilliant comic pair with some standout lines, they know how to move with one another and they know how to dazzle the audience with very little to work with. We find that the King of England is looking for the help of America in the War, which is certainly due to wage across Europe. There are many bitter comments throughout the film about America being dragged into a war, which wasn’t their’s and that without the war, a very different outcome would have occurred. This is the other side of the Royal couple, they are both comedic but also very endearing as a couple under pressure, scared about what is going to happen to their country.

Interestingly, there is a further concern about their representations of the couple, especially with last year’s success for The King’s Speech. It just seems that any high moment of tension of the Royal couple or whenever George get’s angry, it has something to do with his stutter, whether it’s talking to the Queen or the President. During one scene when he gets angry at himself, whilst addressing the President for help, Murray simply asks, ‘What stutter?’ He boils the entire problem down to a question, and with that all is forgotten – if Geoffrey Rush had done that last year, we wouldn’t be having this conversation now!

Furthermore, Hyde Park on Hudson, also contains the worst lighting I think I have seen in a film during 2012. It looks like either Michell as director or someone in post-production has thought that there is only two light settings, on or off and that there simply cannot be any in between – but this poor judgement means that a great deal of the film is in the dark (sorry, pitch black) and I found myself wondering when I would next see a face despite the fact that dialogue and pivotal scenes were taking place. Due to this, all emotion for the film was lost. The scene when Daisy discovers Roosevelt with Missy (a very strong Elizabeth Marvel), a scene which was meant to be a turning point during the film takes place in the dark and therefore I couldn’t see anyone’s reactions and therefore I really didn’t care about the outcome because I felt at distance from what was taking place. 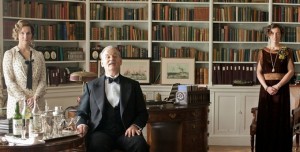 What I do have to admit, is that the individual performances were really quite something for a film which didn’t have a lot going for it. Bill Murray is possibly the weakest link the film, he sits around and finds himself controlling the people around him as if they were puppets, he seems lecherous throughout unfortunately and it’s only in the last moments of the film that you understand where he is coming from. What I do want to point out is that the women in the film, both the characters around Roosevelt and the actresses that play them all do outstanding jobs. Just considering both Olivia’s, Linney and Marvel and the ways in which they interact with each other and Roosevelt really show a sense of class, comic timing and dramatic effect.

In an age where Downton Abbey is one of the highest rated television shows coming out of Britain, I would say Hyde Park On Hudson, is what we call a ‘nice’ film – a period drama, where not a lot happens, the drama isn’t that shocking but plenty of attention has been put into the set detail. The script is pretty plain, and the direction isn’t fantastic but it passed the time easily enough.

Hyde Park On Hudson is playing on the 16th (EMPIRE Leicester Square) and 18th (VUE).