The I, Anna Interviews at LFF 2012
Home
Features 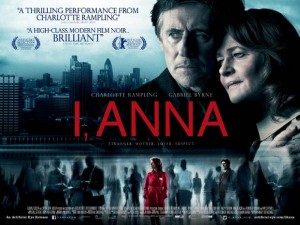 Briefly, I, Anna, tells the story of an older woman, Anna (Rampling) who meets a police detective (Byrne) and the two start to form a romantic relationship. Throughout their time together, a murder investigation is taking place and Anna may not be telling the whole story.

Check out my review for I, Anna, here.

Earlier this year, during the 56th BFI London Film Festival, I got a chance to meet some of the stars and director of the film during it’s premiere at the Curzon Mayfair. In between my excitement at meeting Charlotte Rampling, I managed to conduct these interviews.

Plus, if you haven’t yet seen the trailer, check it out here. Plus, notice one of the quotes in this teaser from someone?