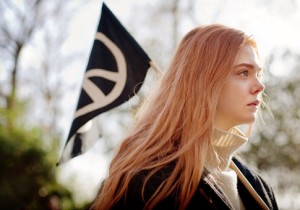 It is with great excitement that my first BFI London Film Festival review this year starts on a high; with Sally Potter’s Ginger & Rosa starring the brilliant Elle Fanning and introducing the equally fantastic, Alice Englert as Ginger and Rosa respectively.

Since watching Ginger & Rosa, I have found that the film has stayed with me more than any other film this year. It may not be as equally gripping as the thrillers this year or as surreal as some films in recent weeks (not naming any…) but what this does have it a stunning script, filled with luxurious characters, acted by some of the most stunning (both physically and in their art) actors and actresses of today from both sides of the globe. Whilst the film may not have immediate impact, it has made me consider and therefore I am glad I waited a week before writing this review; it has made me consider not only the lines of enquiry discussed in the film (which I will look at in a moment) but also the methods used to make this film and the ways in which it was presented to me.

Fanning plays Ginger (in a role that her sister, Dakota, could only dream of getting), who finds herself growing away from her somewhat traditional mother (the delightful Christina ‘Mad Men‘ Hendricks) and drawn further into the world of her pacifist and anti-nuclear activist father (Alessandro Nivola). However, her friendship with the alternative, and rule breaking Rosa (Englert) is put under pressure by her father’s unconventional lifestyle. Add into the mix, Timothy Spall and Oliver Platt, who play Mark and Mark 2, a gay couple who are godfather’s to Ginger and Annette Bening who plays Bella, and we have a cast of characters waiting to discover and show us what 60’s Britain was about underneath the exterior of the sexual revolution.

Although much of the stereotype of the 60’s was swaying around to music with flowers in your hair, and sexuality becoming 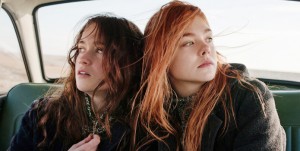 much more fluid; there is another side to Britain, which seems, in recent times, to have been overlooked but Potter places it centre in her film. The world was in a crisis during the 60’s, the sexual revolution was colliding violently with the Cold War and the threat of nuclear holocaust from Cuba; Ginger is more than aware of these troubles for the world and wants to do something about it, she wants to change the world, she wants to ban the bomb and she wants, more than anything, to impress her father; to get the love and affection she believes she truly deserves. But for all of Roland’s activism and anti-establishment, he never accepts that he has become part of the world he didn’t want to evolve and for all his thoughts, he fails on various accounts; as a husband, as a father, as a fighter.

Bening plays the fascinating Bella, from another part of the world; she represents the exotic, the foreign but she also represents the current, the now and the sensibilities that are missing from Roland’s view on the world. Ginger finds herself caught between the fight for anti-establishment and the right fight for the morality and safety of the planet. Bening sweeps into scenes ready to collide with anyone who gets in her way, but she does so with such eloquent grandeur that none of the characters realise the rug is being pulled out from under them. 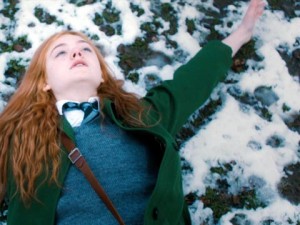 The characters of Ginger and Rosa, have been friends since birth; their mothers are friends and the families have gone through everything together but the differences are that Ginger observes whereas Rosa commits to action; whether it’s the right or wrong. After the introductory act of the film, where we see Rosa’s control over their friendship (she puts her foot down first with boys, sex isn’t important enough to fret about with her), the film suddenly takes a turn and becomes much more insular about the family and yet I saw the damage to the family unit as a microcosm for the issues going on in the bigger world. Although the family divide, and Ginger lives with her father (whilst going to ban the bomb marches), we see the world outside divide and fight it’s way to near destruction. The same happens in the family.

Roland begins an illicit, and illegal, affair with Rosa which hurts Ginger; her friend is getting her father’s love and this divides the family further and irreversibly. This also starts to destroy the friendship between the two girls. This, for me made clear the one weakness of the film. It was trying to represent anti-establishement through it’s characters, it was in fact trying to make a point about the changing world we live in today (despite being set in the 60’s) and yet, it fails in portraying a solution and instead becomes traditional in it’s thinking and portrayals of the family and their dramas.

Acting wise, I believe Ginger & Rosa, has some of the strongest single performances of the year. Both Fanning and Englert are stunning as the two leads. They are the opposites of each other, which is what makes them so compelling to watch as a pair. Whilst Fanning is mostly a representation of her inner thoughts, allowing herself to be lead by her activism and poetry (some would say her character embodies Freud’s concept of the superego as the moral guardian), whereas Rosa is lead by her emotion, her instinct, or as Laurence would put it, ‘her sex’ (and to use the Freudian concept once more, the id, with the uncontrollable desires). Both girls know how to move in time with the film, and both, whether aware or not, know how to seduce the camera to making them the most important things on the screen.

(This is an additional thought to the review, which isn’t fully complete, but I wanted to put it to readers) 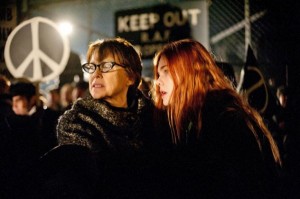 I would like to take a brief moment to comment upon my postulations and considerations of Freud’s methods in Ginger & Rosa. Just a small comment on how each and every character/actor is portrayed as beautiful and sometimes sexy in the film – and I wonder whether this was somehow meant to rangle with your self conscious. The soft glow of the film, and the deep focus always makes each of the scenes a marvel to break down but the characters always stand out as important within the diegesis. Each of the characters, at times of drama somehow manages to look erotically charged (most notably, Nivola as Roland and Hendricks as Natalie) whether this is from their style of dress or the intense emotion on their face.

Potter’s direction also matches the beauty of the film with her soft focus throughout, whether it be on the girls or the surroundings; you never feel completely surrounded or completely alone unless Potter deems it necessary (see police march scene or crying in bed). Each of these scenes are so juxtaposed from the one before, that you can follow the movement of the story with the time lapsed throughout and you allow yourself to be carried.

The stunning Ginger & Rosa, is a must see this year and I think it leaves you wondering upon so many different things – something for repeated screenings.