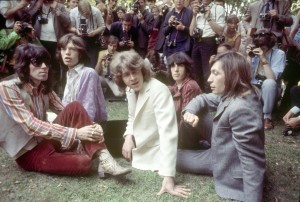 Crossfire Hurricane, the latest documentary on the Rolling Stones, takes its name from a line in “Jumpin’ Jack Flash”, which plays here as if in response to the preceding segment dealing with band members’ truncated jail sentences, as well as the subsequent media vilification that sought to pigeonhole them as morally revolting, incendiary troublemakers. The song itself, as well as its specific placement in this film, doubles as a kind of tonal mission statement: it’s fierce, sustained, enigmatic and mysterious. This was and is a band whose chief strength is to carry on doing what its members have always wanted to do: play music without giving much of a fuck as to how it or they are perceived. Indeed, the Stones’ own oeuvre apparently includes a song for every narrative scenario, and Brett Morgen’s new film is a rapid but predictable historical overview of the first twenty years of the band, reusing and unearthing archive footage to illustrate what will to devotees be well-trodden terrain.

Not that that’ll matter much. What Crossfire Hurricane boasts is an authorised (Mick Jagger is listed among the film’s producers) and energetic canvas that brings together a range of narratives so that certain discrepancies and consistencies can be confirmed or probed. (Jagger reveals that while Keith Richards claimed the band moved to France at one point because they were wrestled out by the police, they actually moved due to tax problems.) For newcomers too – such as, perhaps, the younger generations of hot MTV blondes who peopled the front rows in Scorsese’s strategically hip concert film Shine a Light (2008) – the film assembles and accumulates the myths and mysticism that have carried the Stones into the rock’n’roll canon as well as secured the off-stage reputations of some of its members.

The opening line is a question, asked during the audio interviews that provide the film its narrative backbone: “How good is your memory?” After some preamble, Richards answers, “Never let the truth spoil a good story.” Uneasily, the film never quite shirks this layer of self-immolation; when it reproduces period hysteria by presenting newsreels of anchormen claiming that parents of the Stones’ teen fans have “become homicidal” at the sight of the band, it risks contributing to the aura of confusion that surrounds any defiantly uncategorisable artist.

Nevertheless, Crossfire Hurricane touches at points upon complex questions regarding the artistic process, presenting it predominantly as one of participation and exchange. To this end, the formative years of any artist – particularly those working within the fame-obsessed circles of popular culture – are a playoff between responding and contributing to the generational zeitgeist. Broadly speaking, then – like the film, which presents its history in broad strokes – the Stones form a significant part of any notion of Sixties “counterculture”, and we deserve to understand their evolution in material terms. In this respect, Morgen’s film is problematic: extensive involvement from primary sources does not necessarily amount to a comprehensive picture. That said, with regard to assessing and accounting for the extent to which the Stones responded and contributed to the social currents around them, the most telling moment in Crossfire Hurricane is of a young Mick Jagger, apparently fatigued by the banal questions journalists ask him, who remarks that his band is only articulating a generational dissatisfaction. “With what?” he’s asked. “A dissatisfaction with the generation that are running our lives.” In this line alone, the film accounts for the Rolling Stones’ ongoing appeal.