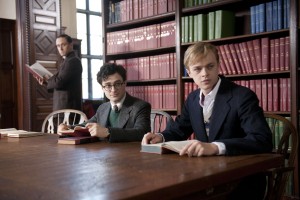 John Krokidas’ debut feature is a key example coming from a new wave of filmmakers making some of the most interesting, beautifully told stories in cinema today. Kill Your Darlings is the intimate story about how the poets from the beat generation met; Allen Ginsberg, Jack Kerouac and William Burroughs. Their story comes from a dark and twisted place, but they clearly started as they meant to go on as they changed the face of poetry, culture and youth around the world, with their words still echoing across generations to this very day.

Kill Your Darlings is a very complex narrative, drawing inspiration and focus from a number of stories around the group including the murder of teacher David Kammerer (played by the great Michael C. Hall) by the mysterious and deeply gifted student, Lucien Carr (a real star in the making in Dane DeHaan) but also Carr’s grasp and psychological mind play with Kammerer and fellow student, the young Allen Ginsberg (an unrecognisable and brilliant Daniel Radcliffe).  The film also explores the relationships between these poets; their intimate desires with one another and how they react to the women around them. When they find themselves constantly questioning their every decision and their place in the world, they finally find their own definition for the beat generation and the importance they have within defining a literary movement.

What Krokidas does with Kill Your Darlings, is give the audience some much needed context behind the legends of these characters. The murder is a greatly 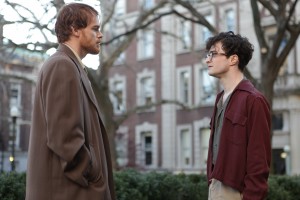 documented piece of history but rather than spend the entire film involved in some ghastly period murder mystery, the film is much more interested in what these boys went on to do afterwards; each and every turn is an integral moment in the film and the audience watch this young group grow to become some of the most important writers in American literature. At the same time, the film could have become a gay coming of age story, with the relationship between Carr and Ginsberg taking centre stage (sure there has been enough publicity about this being Radcliffe’s gay film) but it instead becomes an exploration, necessary to understand all the characters. Whilst Ginsberg quickly becomes the eyes for the audience, this instead is a story about the awakening of him to the world around him as he goes off to college (including sex but not strictly).

Performance wise, both Radcliffe and DeHaan are simply radiant on screen; these performances forecast long and successful careers to come. It feels a long time since Radcliffe played the boy wizard and whilst many thought he would never really be able shed those robes, he has done a fine job in showing off his skills (Equus, The Woman In Black and the forthcoming Horns & The F Word) and really cementing himself as an important figure in British cinema. DeHaan is menacing and stunning as the dark and challenging Carr, his movements across the screen are as important as his speech and his face is filled with such intense emotion that he could have been a silent cinema actor. When the two of them come together on screen, they chemistry is electrifying whether it is a love scene or one of their arguments; the audience always feel exactly what is going on. 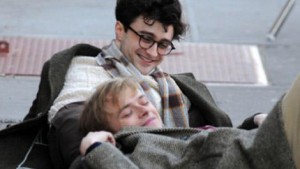 Whilst there are moments when Kill Your Darlings feels quite over the top, it seems it would have been quite comfortable on stage in front of a live audience, it doesn’t take away from it’s charm and charisma. The sets, props and costumes are brilliantly designed, showcasing all the real talent that worked on this production.

Kill Your Darlings is affecting and emotive, it pushes the audience to really feel and understand what the characters are going through. The performances are some of the strongest of the year and Krokidas has set up a world, filled with excitement and wonder. It makes you wonder what he is going to get up to next.