The Woman In Black 2 Angel of Death Review
Home
Reviews

The Woman In Black 2 Angel of Death Review 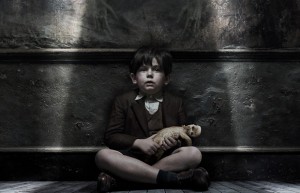 The Woman In Black 2: Angel of Death is the perfect distraction from the post Christmas blues; horror, darkness, screaming and missing children – sounds just perfect doesn’t it? Whilst the idea of creating a franchise around the story of the mysterious ghostly woman who inhabits Eel Marsh House seems like a good idea on paper, it perhaps isn’t the wisest of choices as filmmakers decide to skip further and further away from the original Susan Hill text.

The first in the series, starring Daniel Radcliffe, freshly post Harry Potter seemed like a great idea (based upon the stage play, which is based upon the original horror novel) and it did as it said on the packet; packing out and frightening audiences. But this time around there is no Radcliffe. Instead, Angel of Death is led by the hugely underused Helen McCrory as the stern and seemingly always angry Jean, the fresh faced Phoebe Fox as Eve, Jeremy Irvine as Harry and introducing the excellent Oaklee Pendergast as the scared little child, Edward.

40 years after Arthur Kipps left the eerie house in the middle of the British countryside, Angel of Death takes place during World War II where children are being taken from London and evacuated to get away from the dreadful bombings that are occurring on a regular basis. Jean, a head teacher at a local school and one of her aids, Eve are travelling with a group of young children as they leave their parents behind for the safety ahead of them. The group find themselves at Eel Marsh House, which continues to be a thoughtful and incredible looking set on screen. The house itself towers over the action and becomes just as important as anything else in the film; when the mist comes in and the horror really begins, the house doesn’t provide any solace or safety but instead grows more horrifying and beautiful.

On the train from London, Eve meets a young and handsome soldier, Harry, who promises to come and visit her. The pair has an instant connection but 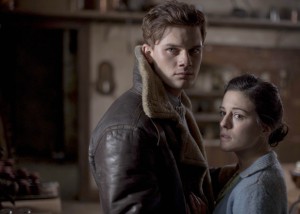 love stories in the midst of horror are often difficult to formulate, especially if little if anything is known about the characters. Once the children and the two women arrive at the house, they are told that more are due to join within a week but for now they must make do. The house is slowly crumbling around them, but this is better than the shells in the air of London. Eve and Jean have two bedrooms upstairs, whilst the children remain together in one of the bigger rooms near the front of the house. It isn’t long before Eve starts to hear noises that go bump in the night and when children start to disappear, she knows something larger is at play.

One of the young boys, Edward, is introduced right at the start of the film, as both his parents had died in a bombing incident the night before they left London. He says nothing but feels a connection with Eve, who in turns decides to look after the child especially. Of course Edward feels something in the house as well but promises the ghostly presence that hides in the shadows to not tell anyone about her.

The film continues with all the usual bells and whistles one would expect from a horror film that is trying to look ‘old school’. The darkness swallows up the set, mist grows across the screen, there is no escaping this huge haunted house and Eve realises that she must save the day. As the audience was accustomed to in the first film, there is a room with a rocking chair, which creaks louder than any other piece of furniture in the history of cinema. The dolls in the room are hideous and the most fun happens when doors suddenly close and lock from behind. 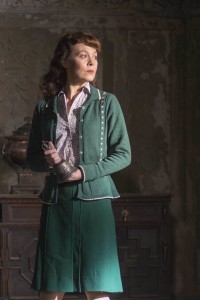 All in all, the biggest downfall of Angel of Death is actually the story itself. Little debate should be had around the direction, cinematography or the indeed the acting of the film because really they all come together to make the film as best as possible but when the story doesn’t have the same power, it can bring the whole film crumbling down. The rest of the film plays out quite by the books; children die, Harry returns to try and save the day, secrets are revealed and it is only Eve that can help Edward and save him from the Woman in the shadows. Fox’s performance in particular is really wonderful to watch; she manages to bring a great balance between a woman scared and alone but also a woman with a great power for overcoming the evil and saving the day. Director, Tom Harper, does a great job creating terror on screen, even more so than the previous film. Rather than just creating tension, which explodes in a cheap scream, he works to get the surroundings under the skin of the audience. It’s just a shame about the story.

All in all, this is a far better ghost film than many others that have been made in recent years. Whilst many directors are trying to create the atmosphere and horror of old fashioned Victorian ghost stories, many are just missing the mark. Angel of Death doesn’t solve the issue but is a good try indeed.