What If Blu-ray Review
Home
DVD/Blu-Ray

What If Blu-ray Review 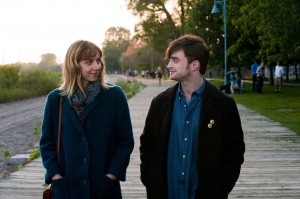 Michael Dowse’s What If potentially exists in a world where audience’s don’t expect all romantic comedies to be cheesy, often tasteless and filled with pointless cliche but of course this is not the case; had that world existed, What If very possibly could have just become another high quality romantic story but because of the lack of good romantic storytelling in cinema today, it stands out as being very funny, extremely charming and well judged storytelling. Based on the play Toothpaste and Cigars, What If has a new twist on the rom-com storyline – instead, it poses the question of whether men and women can just be friends without actually needing to have sex and fall in love.

What is so brilliant about What If is that it poses the question early on, forces the audience and characters to consider it and just when you want the couple to not be together because they are such good friends, Dowse actually progresses his characters far enough for them to fall in love without it feeling forced or by the books.

Wallace (Daniel Radcliffe) and Chantry (Zoe Kazan) meet at a party one evening; having finally started to get over his previous relationship (and the ones before it), Wallace has decided to come out after locking himself away for almost a year. A med-school drop out, he has a dead beat job writing computer manuals, lives in his sister’s attic and generally feels as if nothing is going his way. But when he locks eyes with Chantry, who is writing her own fridge magnet poem after his finishes his, he finally feels that he could have a chance of meeting someone really interesting. They spend the night chatting and having a laugh but when he walks her home and finds out that she lives with her boyfriend, it seems that nothing is ever going to happen between them. On a chance meeting soon after, they bump into one another at the cinema (where they had both gone alone) and there starts a beautiful friendship between them. He meets her boyfriend, Ben (Rafe Spall), who gingerly warns him not to ever try and put his penis in her vagina and then Wallace accidentally knocks him out of the window of the apartment. What If so carefully treads around the relationship, letting it bloom naturally and makes the audience wonder what they should do if the pair realise that they really are in love with one another.

One of the reasons that What If may work so very well is the choice of excellent casting; Daniel Radcliffe and Zoe Kazan lead the very capable cast as the 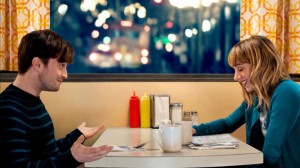 loveable Wallace and adorable Chantry. Both of them mean no harm, they are both a little socially uncomfortable and both seem to have the same dark, ironic humour that is so often miswritten in film. Firstly, a film about friends falling in love and making it believable requires great talent and skill from those involved and Radcliffe and Kazan are brilliantly able and beautiful to watch on screen. Whilst both bring their own individual flair and quirk to the characters, they work best when on screen together. They play off of one another; bouncing between humour, drama and at the end of the day, love. What If is also not worried about bringing together a mixture of accents from the cast, which adds to the charm of the film in ways that are difficult to write. Radcliffe keeps his English accent, which against Kazan’s own American accent is really pleasant and makes the characters more endearing.

With a supporting cast including Megan Park, Adam Driver, Mackenzie Davis, Rafe Spall, Sarah Gadon and Jemima Rooper – it really makes the film feel
international and quite a home with it’s mixture of British, American and Canadian voices. As these characters each represent something different and bring something different to the film; the humour in particular really works and stands out from other films in the genre because depending on who is acting the scene, the type of humour that comes across can feel really different. As well as Radcliffe and Kazan, Radcliffe also shares a number of scenes with the brilliant Adam Driver (of Girls fame) and they both also set the screen alight when taking the piss out of each other. They act as if they have been friends for years and their discussions are as natural as anything said when the camera isn’t rolling. 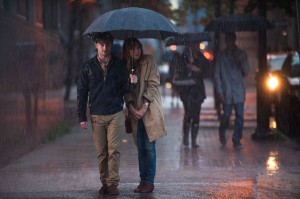 Dowse’s filmmaking is also so individual and unique – he works to really show the best of all the actors on screen and whilst this may be one of the best things Daniel Radcliffe has done so far (and there is still a lot more to come), each and every single member of the cast are working brilliantly in tandem with one another. Dowse and his crew work to show everyone looking at their best and particularly brings out both Radcliffe and Kazan’s amazing blue eyes, which physically light up the screen. He also touches a little with fantasy, heightening certain parts of the world around the characters, like the starry sky or the cityscape, which often twinkles on screen. Chantry is an animator, and much of her drawing is based on things that have happened in her life, but these drawings are best used when they come to life and sweep up the moments between scenes.

What If changes up the romantic comedy formula, the same way that 500 Days of Summer did. It may (in the end) play out as expected but the route there is so refreshing and fabulous that you can’t help but fall in love with the characters. If you are in the mood for a feel good film, which will keep you smiling to the end, check this one out.