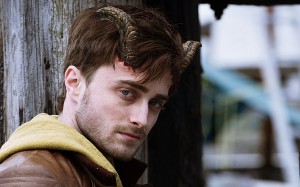 As far as horror-cum-thrillers go, Horns is pretty much on par as one of the most exciting and unforgettable in a long time. Alexandre Aja, who has been at the helm of this Joe Hill adaptation, has proven that not only does he have a unique stylistic flair but that he has some crazy bat-shit ideas running around in his head!

Led by Daniel Radcliffe alongside Max Minghella, Joe Anderson, Juno Temple and briefly by Heather Graham, Horns is gripping from the very opening, twisting and turning in ways that the audience could never imagine. It is intelligent, scary and packed full of surprises. The film opens with Ig (Radcliffe) and Merrin (Temple) laying together and proclaiming their life long love for one another – they seem like any other young couple – full of hope and naivety for what is about to come. But soon the camera pans down, below the ground, under the couple and we find Ig, who’s full name is Ignatius (believed to mean “the fiery one”) alone, tired and disparaged. Through a series of meetings and the growing crowds of people, the audience learns that Merrin’s body was recently found out in the woods, where she had been raped and murdered. The only suspect the police have is Ig even though he is adamant that he didn’t do it. Even his family are a little unsure about what to believe.

As the film goes on, Aja tells the backstory to the couple from their very first meeting as school children in a local church (where the 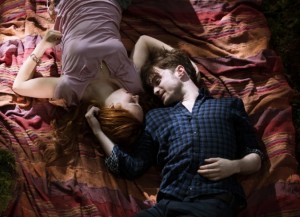 audience learn that Merrin is particularly religious), the tension between Ig and his friend, Lee over the girl, throughout the couple’s relationship, up till the point where Merrin tells Ig she wants to break up and move on with her life (soon before her murder). This seamless cutting between the past and present, adds fruitfully to the storytelling, filling in the gaps where necessary and creating an overbearing sense of tension throughout. It also gives Ig motive and reason for the murder if his girlfriend wanted to leave him and he is led to believe that she has been sleeping with someone else. Therefore the audience are never quite sure who to believe but all will be revealed.

So far, so good. A clear and concise murder mystery has been set up. His lawyer and friend Lee (Minghella), the very same Lee who also had a crush on Merrin when they were younger appears throughout to calm down Ig and help him on his way.

But of course this wouldn’t be a good ol’fashioned horror without the entrance of the devil himself. One morning, having had a drunken one night stand with a local girl, Ig wakes up to find that small horns have started to grow from his forehead. This is kind of crazy, no? He obviously freaks but the girl doesn’t find this mysterious at all. Instead she is much more interested in asking for permission to eat all the doughnuts. This is when the crazy really starts as she gorges on the sugary snacks without a care in the world. But she feels that she has to get Ig’s permission to do so. The whole admitting their inner and darkest thoughts followed by asking for permission continues around Ig; no one panics that they can see the horns from his head and suddenly things start to become a little (as much as they can) clearer. Is Ig turning into the devil? He asks the doctor to try and remove them but instead they grow bigger and more powerful. 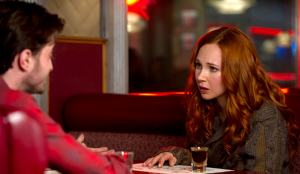 So there are two stories working side by side with one another but for one to be resolved, so must the other. Ig decides that to get rid of this power, he must work out who actually killed Merrin but of course along the way he gets to have some fun. The most powerful sequence is when he is being chased by local news crews; he promises an exclusive interview to the crew that successfully beats the shit out of the other. It’s hilarious but it’s also very shocking, the way these crews literally start to smash each other up.

Not only is the story thrilling but Aja’s filmmaking is so on point with Horns, he captures the small-town claustrophobia to an effortless degree, forcing the alienation between the people and Ig to be even more intense. His colour palette is stunning on screen, from the greys and blues of the surroundings, to the fiery reds and greens when Ig’s power stars to grow.

Horns may not be for everyone; it’s not a straight forward horror film but instead takes some of the best techniques from horror and merges them with a good mystery; it keeps the audience guessing to the final act and ties everything up at the end in an unexpected way. Brilliant.