From fantasy series like Harry Potter to stand-alone works of fiction like John Green’s The Fault in Our Stars; there have been many announcements about popular young adult novels hitting the big screen.  In 2008 the world was introduced to heroine and rebel, Katniss Everdeen with the publication of Suzanne Collins’ The Hunger Games which has since been made into a critically acclaimed film series. On October 2nd stunning and alternative limited edition books are released ahead of the third film adaptation of the trilogy! To celebrate the release of these books we have put together a list of other famous young adult books turned successfully turned into films. 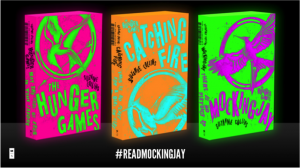 It’s hard to believe that J.K. Rowling’s Harry Potter and The Philosopher’s Stone was released back in 1997. Harry Potter came to the screen in 2001, starring Daniel Radcliffe and Emma Watson. The child actors had begun their 10 year journey with Harry Potter which launched their successful careers.  The seven novels (turned into eight films) follow a young boy who is a wizard, learning the trades of magic. Readers grow up with Harry and his friends through their years studying the world of wizardry at Hogwarts.

Divergent, by Veronica Roth, is set in a dystopian future where Chicago is divided into different factions based on traits which are determined by aptitude tests. This trilogy follows Tris as she is forced to make a very important life choice at a very young age:  choose the faction that she will remain in for the rest of her life. The factions soon begin a battling against each other and the trilogy follows the faction wars and the growth of her love story. The Divergent series is currently being made into a film franchise, starring Shailene Woodley in the lead role.

The Twilight Saga kicked off the huge vampire craze that had taken over the media in recent years. The books, by Stephenie Meyer, were soon made into a film series starring Robert Pattinson and Kristin Stewart.  The Twilight Saga follows high school student Bella Swan as she falls in love with a mind reading and glittering vampire named Edward Cullen. As Bella ventures further into Edward’s vampire world she meets other mythical creatures such as her werewolf best friend Jacob. A love triangle begins between Bella, Edward and Jacob and a romantic adventure series was born.

City of Bones is the first in Cassandra Clare’s Mortal Instruments series. The story introduces us to Clary Fray, a teenager living in Brooklyn who learns that she’s a Shadowhunter and the descendant of a line of demon hunters. She is then forced into the dark and dangerous underworld of demons and those like herself who exist to rid the world of these threats. With a total of six novels in the whole series, City of Bones (starring Lily Collins) is only the introduction to a fantasy world filled with demons and werewolves.

The Fault in Our Stars

This story is very different from those previously mentioned; it does not feature a dystopian world or mythical creatures.  The Fault in Our Stars by John Green is a very real look into the life of a teenage girl who is dying from cancer. It follows the struggles Hazel encounters as she falls in love knowing that her illness is terminal. The novel has recently been made into a feature film starring Shailene Woodley and Ansel Elgort which has been hugely successful. Unlike many film adaptations it stays very true to the novel, which makes book lovers and cinema goers very happy.

Experience all the action from The Hunger Games with the release of these limited-edition books, available to buy from 2nd October