Daniel Radcliffe on What If?
Home
Features

Daniel Radcliffe on What If? 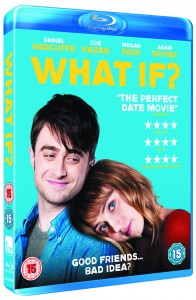 Daniel Radcliffe has been acting since the age of 9, when he played the young David Copperfield opposite Maggie Smith in the BBC’s 1999 adaptation of the classic Dickens story.

But it was in 2001, when Radcliffe was cast as the titular boy wizard of HARRY POTTER AND THE PHILOSOPHER’S STONE that he became an internationally recognised movie star. Eight feature films, adapted from the seven novels by JK Rowling, were to follow, grossing more than $7bn at the global box office.

With roles in DECEMBER BOYS and MY BOY JACK Radcliffe proved he was no one-trick pony. But it was his 2007 turn on stage – in Thea Sharrock’s West End revival of Peter Shaffer’s play EQUUS – that established Radcliffe as a serious young actor. Then 17, Radcliffe earned rave reviews for his haunting turn as Alan Strang, a role that required him to disrobe. The actor was nominated for a Drama Desk award for Best Actor when the play transferred to Broadway in 2009.

Since the final chapter of HARRY POTTER was released, Radcliffe has shown an extraordinary range and talent for choosing diverse projects. His first post-POTTER role on the big screen was in James Watkins’s feature film adaptation of the classic ghost story THE WOMAN IN BLACK. With a script by Jane Goldman, Radcliffe’s performance helped THE WOMAN IN BLACK earn more than $125m globally.

Radcliffe brought three films to the 2013 Toronto International Film Festival. He starred as Allen Ginsberg in John Krokidas’s KILL YOUR DARLINGS; played the role of Ig in Alex Aja’s adaptation of Joe Hill’s HORNS; and starred opposite Zoe Kazan in WHAT IF, from Elan Mastai’s script and directed by Michael Dowse.

On stage, he starred in a revival of the musical hit HOW TO SUCCEED IN BUSINESS WITHOUT REALLY TRYING on Broadway, and played the title role in Martin McDonagh’s THE CRIPPLE OF INISHMAAN in the West End. He will reprise his role when the production relocates to Broadway in April 2014.

He has just completed work alongside James McAvoy in a retelling of the FRANKENSTEIN story. Ahead of the cinema release of WHAT IF, Radcliffe sits down to discuss the film.

What shape was WHAT IF in when you joined? Was Michael Dowse on board as director?

Michael was very much on board, and when I got the script it came with a letter from him saying why he 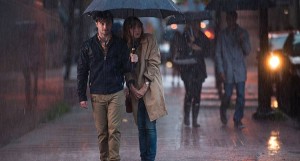 wanted me to play the part and why he thought I’d be good for it. And then I read the script and we spoke shortly afterwards. I became attached because I absolutely wanted to do it.

Then it was just a matter of finding the girl to play Chantry. We needed somebody that, as well as being obviously very charming and funny, was also really, really smart, because her character is. And Zoe Kazan is one of the smartest people I’ve ever met – forget just actress or actor, she’s one of the brightest overall. So that made working with her really easy, because she just responds to any and everything you can give her.

How long did the search take?

I don’t think there would have been more than three months between me becoming attached and us getting ready to start filming. So it was quite a quick process with this one, and once Zoe had read it and loved it – and she just had RUBY SPARKS coming out – there was no need to look anywhere else, obviously. She was our girl.

The script was on the Black List of hot screenplays – when it came to you was it in the shape it is now? Was it tailored much?

It was pretty much in the same shape that it is now. The only differences were that, at one point, the latter part of the film that takes place in Ireland was supposed to take place in South America. But Ireland is very friendly to films, so we switched it to Ireland. Other than that, it was very much the same. Little changes in terms of dialogue were made, but there were no major story changes or anything like that.

The moment I knew I was going to do the script was on page two, when Wallace is correcting Chantry on her pronunciation of a word, and I was just like, “Ah, I’m that guy.” [laughs] I definitely responded to that a lot.

I responded to how clever it was and how much heart it had also. There’s always a danger in films like this that it can end up being 90 minutes of people being witty with each other, amounting to something a little bit soulless, and actually our film does have a huge amount of soul. I really think it’ll make you very happy. It’s a happy-making film when you leave it, which is a hard thing to do without resorting to cheap tricks. 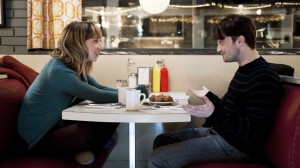 Despite what happens between Chantry and Wallace, the film seems very clear that of course men and women can be friends. How do you think it strikes that balance?

That’s the thing about the film, because I think there are two separate issues. Because of this film, people have started asking me whether men and women can be friends. And of course the answer is yes. I’m friends with lots of women who I have no intentions to sleep with. There is also the question of whether men and women who are incredibly sexually attracted to each other can just be friends. That’s a much harder issue, and much more difficult to deal with. That’s the issue that is present in the film. I think it’s a very outmoded thing now – the idea that men and women can’t be friends. I think it’s fallen by the wayside now.

What were your first conversations with Michael like? Was it essential the two of you had chemistry?

Yes, and it was also about finding out what kind of film he wants to make. And that’s a hard thing to quantify or to talk about. Michael referenced a lot of other films. He was referencing movies like IT HAPPENED ONE NIGHT and WHEN HARRY MET SALLY. They were big touchstones for us, because it’s all about how the relationships are built through banter, and through actually being kind of insulting to one another at first, and taking the piss.

We also talked about the way he wanted to make the film. Michael said he wanted to film a lot of these scenes in wide shots and just let the audience watch the characters rather than cutting into close coverage. He stuck to this beautifully – because normally directors say things like this and then it all goes to hell once they see a cooler shot. He does that a lot in the film – it feels like he tries to stay in the wide for as long as possible – so that rather than telling you what you need to see of these characters, he’s just observing the story. That’s the joy of this film: you get to observe the very intimate beginnings of a relationship in a really fun way and you get to live them vicariously again through these character.

Wallace is a med school dropout, which plays nicely into the film. Rom-com jobs often seem plucked out of the air; was it nice to have that specificity for him?

[laughs] Well, I think, for Wallace you could probably pick a job out of the air for him, to be honest, but 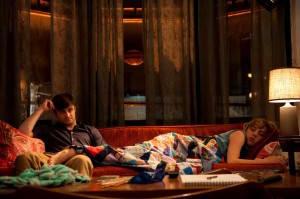 with Chantry I actually really love that she’s a woman in a film with a job, and you see her doing her job a lot. She’s not just a girl who turns up and has loads of time to go around worrying about men. She has a job, which she has to go to. It’s not the point of the movie, it’s just a fact of the movie, and I think Elan Mastai is a very good writer who takes those kinds of things into account. Elan, by the way, is the guy who is kissing my ex-girlfriend in the film.

That said, the med-school dropout thing brilliantly comes to the fore a couple of times when people sustain injuries that he is suddenly expected to deal with.

He causes quite a few of them.

Yeah, actually, he does! That’s one of my favourite moments in the film, because it’s generally such a wordy film, and then we treat ourselves to this moment of utter slapstick halfway through.

Yes, absolutely. And it’s one of those great jokes like Peter Sellers spinning the globe. You know what he’s going to do – you know he’s going to put his hand on it and fall over. It’s a similar joke; just before it happens you know exactly what’s going to happen, and then it does and you still laugh. They’re the best kind. Why else would you have them open the window if someone wasn’t going to fall through it? It’s a great moment.

Adam Driver is off to Star Wars next. Is it hard keeping a straight face during takes with him?

Adam Driver is one of the most hilarious improvisers I’ve ever met. I don’t have extensive comedy experience, but some of the lines he was throwing out take after take after take, it was a real struggle. One of the things I got better at on this film was just learning not to laugh on camera, because he would regularly say stuff that would make me want to go. My favourite one, and I think it’s in the movie, was when he’s watching old people play Bowls and he shouts at one of them, “You couldn’t find that stone if it was in your kidney.” [laughs] He’s amazing, and a really interesting guy, as well. He was in the marines, he runs a charity organisation and he’s just a very interesting, smart dude.

I filmed two films in Canada last year – one in Toronto and one in Vancouver – and they were both just a pleasure to work on. Canadians are really friendly and really polite. They’re everything their international reputation says they will be. I had a great time there. I ate really badly – lots of poutine, which is chips in gravy, cheese and bacon. It was a really fun place to work.

Talking of eating badly, one of the highlights of the film is the Fool’s Gold sandwich. Did you try it?

Fool’s Gold was amazing. For anyone that doesn’t know, it’s a very large sandwich with a lot of peanut butter, jam and bacon inside it, and it is delicious. They obviously made some on set for the montage in which it’s being made in the movie. And I don’t understand why, but me and one other guy were excited to try it and everyone else was being very healthy and, frankly, gutless about it. Everyone should have tried it. It was lovely.

You also went to Dublin with the film?

I got to go across to Dublin, for one of shooting. I just got punched down some stairs and then had to run a bit. It was lovely to be there though – it’s always a pleasure to go to Ireland and Dublin’s a great city. Dublin has a brief cameo, but it really is shown beautifully in the film. This film uses the locations it has really well. That was a lovely shoot, and I got to work with the wonderful Oona Chaplin, who got to step over me and make sure I wasn’t dead. And get punched down stairs by Rafe Spall.

WHAT IF? IS AVAILABLE ON BLU-RAY AND DVD ON 9TH FEBRUARY, COURTESY OF ENTERTAINMENT ONE