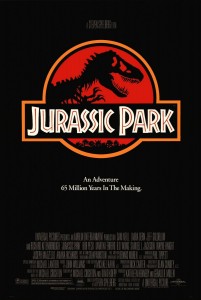 When I was about six or eight years old I wanted to be a palaeontologist (and yes, I knew the word, if not how to spell it). So you can imagine the excitement of this formerly dinosaur obsessed, now movie crazed, kid when, right around my twelfth birthday, Jurassic Park opened in the UK. For weeks before I had pored over the detailed making of book (which I still have, and which provided a lot of the initial grounding in what I know about how movies are made). I don’t remember where I first saw the film, but I do remember my reaction to it; I was bowled over, genuinely sucked in to this exciting story, I identified with Tim, the dino obsessed kid, I laughed at the jokes and jumped in all the right places. Now, 18 years on, Jurassic Park is returning to cinemas (to advertise the Blu Ray release of the trilogy of films). Whenever you go back to a childhood favourite there is a sense of nervousness; will it have the same effect? Will it still be magic? Happily, Jurassic Park is wearing its age very well, and the shine has barely come off it despite the passage of almost two decades.

Based on Michael Crichton’s novel, the film sees eccentric billionaire John Hammond (Richard Attenborough) fund a park where the attractions are living dinosaurs, cloned from blood found in fossilised amber (go with it). With investors concerned, Hammond has a group of scientists, palaeontologist Alan Grant (Sam Neill), palaeobotanist Ellie Sattler (Laura Dern), and Mathematician Ian Malcolm (Jeff Goldblum) come to preview and evaluate the park. Along for the ride are Hammond’s grandchildren Tim (Joseph Mazello) and Lex (Ariana Richards). Guess how well the visit goes.

Crichton knew who he wanted to direct the film of his book – Steven Spielberg – and he was right, it’s perfect directorial casting; few people have ever made mainstream entertainment so well crafted, and, well, just so damn entertaining. Jurassic Park isn’t Spielberg’s deepest blockbuster, it doesn’t have the emotional resonance of an ET, but it’s a ride, and as rides go it is one of the greats (only really challenged by a handful of Spielberg’s other films).

This isn’t to say that Jurassic Park has nothing going for it but its set pieces, indeed David Koepp’s screenplay is well crafted, with characters quickly but sharply established, each of them very much given their own voice from the leads right down to Samuel L Jackson’s small part as one of the computer operators. Koepp has translated the big action moments from the book effectively, but he’s also found room for witty dialogue and characters who, even if they don’t grow much, at least feel as though they have a life outside of the narrative. This is probably most notably felt with Jeff Goldblum’s character, Ian Malcolm, who gets the lion’s share of the film’s funniest lines, but isn’t made to simply be comic relief, instead also getting to make some of the best and smartest points made about the park.

A reasonably rich script, at least for a film of this type, entices good actors, and helps them give strong performances. Predictably, given his previous association with Spielberg and the character’s taste in millinery, the role of Alan Grant was initially offered to Harrison Ford, but for my money the lesser known Sam Neill was a better choice; he’s a great actor, and brings a solid believability to Grant, but it’s his status as a character actor rather than a star that really helps, Ford would have unbalanced the movie, he would have been the star, and let’s face it… the dinosaurs have to be the stars here. Also cast late was Laura Dern, who came into the frame after Juliette Binoche turned down the part (to do Three Colours Blue, hard to argue that choice really). Dern was, and remains, one of Hollywood’s most interesting and most underrated character actresses, and she radiates both intelligence and warmth as Ellie. The kids are good too, without too much of that annoying cutesy quality that Spielberg often brings out in his child actors. The standout, though, is Jeff Goldblum, having an enormously good time flirting with Dern (who became his fiancé) and saying every line with his tongue firmly in his cheek (“I wonder if this will be on the tour”, as a T Rex chases him and Dern in a jeep).

It’s great that the script is solid and that the performances are good, but it’s clearly not really the point. Jurassic Park is a film driven by action and by effects. It is perhaps less breathless now than it felt in 1993. Editing and ‘storytelling’ styles have changed in the last 18 years and I wonder whether the number of times this film pauses its set pieces for a character beat or the hour long build up to get to the film’s first post credits set piece will make it feel slow to a young audience. I hope not. That concern aside, Jurassic Park still delivers the goods with incredible style. Okay, so the first time we see a Brontosaur the matte lines are visible, but the CG still impresses and Neill and Dern sell the effects with their awestruck performances. Jurassic Park was one of the first films to use a lot of CGI, and certainly to render important elements of the film which had a lot of screen time using it. Amazingly the effects don’t look all that dated, in fact they’ve held up much better than many more recent efforts, perhaps because there was a lot of work done on these effects as proof of concept tests even before cameras rolled.

Of course CGI was not in 1993, as it has increasingly become, the be all and all of special effects technology, and so many of the dinosaurs we see here are life size animatronics, apparently close ups are generally animatronic while full body shots are mostly CG. The effect of this is that it gives a weight and presence that can often be absent from CGI, so by the time the method of rendering shifts, and we are looking at things that aren’t really there, we’ve already bought in to the reality of these creatures. That’s perhaps the most important test of the effects here; do we believe this? I did when I was twelve and, to my slight amazement, I still do. 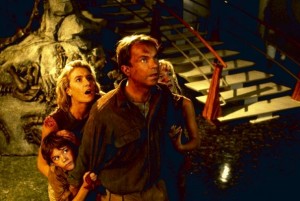 The effects, however, are not the whole show here. The effects serve the story, not the other way round. The believability of these dinosaurs makes some scenes moving (I defy you not to have the same awestruck reaction as Grant and Ellie do to the Brontosaurs) and others deeply scary (the kitchen set piece in which Tim and Lex are chased by Raptors leaps to mind). The Tyrannosaurus Rex is especially amazing; it’s believable and frightening, and the animation that makes the full body CG Rex moves is brilliant, but more than that it has character, there has been real thought put into how it behaves as an animal, and it’s that sort of attention to detail that marks Jurassic Park out.

Spielberg marshals the action set pieces brilliantly; the Rex attack, tree, and Rex chase sequences flow into each other, creating an outstanding near half hour long action and suspense driven centrepiece for the film, but he also understands the power of having very little happen. Two of the most striking shots in the film are of ripples on water (once in a glass, once in a footprint), and the foreboding they convey is as scary and as powerful as any effect in the film. The director’s real skill should be to draw all the disparate elements of a film together into a cohesive and attention grabbing whole and from the script and performances to the action to the effects to John Williams’ majestic score, Spielberg manages just that here. Yes there are a few bumps along the way (Richard Attenborough’s here today gone tomorrow accent for instance), but the film as a whole is so well crafted and so entertaining that complaining about them would be, well, rude.

I imagine that there will be more than a handful of people my age who saw Jurassic Park when it opened in 1993 who will be taking their own children to see this re-release. I hope it’s as thrilling for them as it was for us, and I hope it holds up as well for you as it has for me.

Jurassic Park is also set for a big screen re-release. It be showing at the BFI London Imax from 23 September – 6 October.