Win Tickets to The Nomad Cinema

Summer is our time to head outside and celebrate life through film. The on-going love affair with London’s great outdoors continues as The Nomad Cinema sets out once again on an adventure like no other. Equipped with its mobile projector and a backpack full of booby traps, they’ll be stopping for a Royale with Cheese and a quick phone home, before getting loose, singing and dancing whatever the weather, learning the bare necessities, practising the Pachanga, tying the knot, dressing up for breakfast, then setting off for the drive of their lives in a green 1966 Ford Thunderbird convertible, leaving the Dinosaurs far behind them… and remember – in some of London’s greenest and greatest spaces, on the darkest of nights, the only thing to do is dance magic, dance.

Returning to favourite Nomad locations and adding some exciting new venues along the way, you can catch the roaming pop-up at Coram Secret Garden, Queen’s Park, Fulham Palace and The Royal Parks – including Bushy Park, Hyde Park Lido and the especially eerie Brompton Cemetery.

For full listings and to buy tickets visit http://whereisthenomad.com/

Front Row Reviews have teamed up with The Nomad Cinema to offer some tickets to the Queen’s Park screenings. 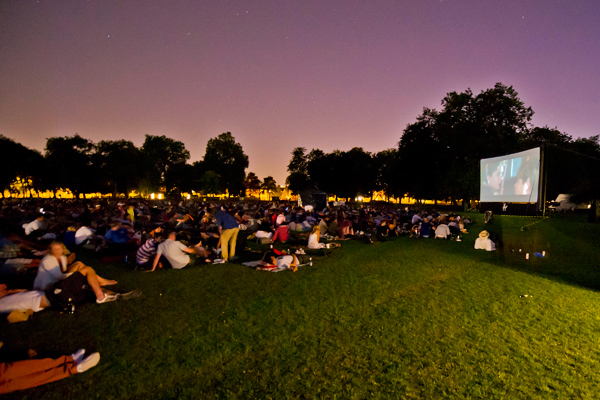 Queen’s Park gets a smattering of epic, pop-cult, ultimate chick flick and enduring classic with Jurassic Park, Thelma & Louise, Pulp Fiction, and Cinema Paradiso, the much-loved, award-winning tribute to the transformative power of cinema – a fitting finale to the season of summer pop-up.

We have a pair of tickets to give away to the screening of Jurassic Park on Saturday 16th August!

Please only enter if you can attend the screening!!

Which of these is not one of the Nomad Cinema venues?