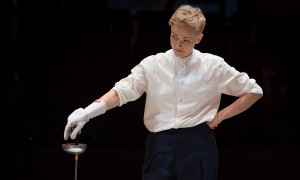 Sarah Frankcom and Margaret Williams together work to bring Hamlet to the stage and film at exactly the same time. Maxine Peake takes centre stage as the tough and strong willed Hamlet, who wants nothing more than to revenge the untimely death of his father. It is fitting, in this instance to say that Peake gives a tour de force performance as the Shakespearian anti-hero, and with the release of the production on film, it allows wider audiences the chance to witness this powerful and frankly breathtaking adaptation.

With the vast number of theatre performances, musicals, operas, ballets and even museum tours now making their way to the big screen, it has to take something to make one stand out from the rest and this version of Hamlet so dearly deserves it. Taking place in the round, which in film terms really allows the camera to explore all over the stage with very few boundaries to its path, this telling of Hamlet sees a really great cast of actors take to the stage. The chemistry between the entire cast is electric, with each member bouncing off of another with a sense of pride and knowledge that they are doing the best job possible.

The camera also is willing to take full advantage of everything that makes this production so unique and special; from the staging, to the lighting and all the way to the pacing of this performance – it feels seamless and mesmerising to watch as the story unfolds. This performance also makes the audience question everything they thought they knew about Hamlet and possibly Shakespeare himself – there is a great negotiation of audience expectation. A female playing the central lead male character blows the story wide open in so many different directions but also a nod to Shakespearian times as there is a reversal from the boys playing the female characters, as was often done.

The bloodiness and the intense drama of it all is equally as powerful as the actors themselves and with very few props except for their own bodies, this adaptation is wholly challenging, memorable and worthy of closer inspection. Surely starring one of the best modern day Shakespearian performances from the always great Maxine Peak, Hamlet is back and here to stay.