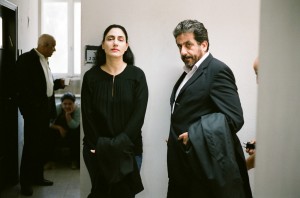 One of the best and most compelling Israeli films of the year is Gett: The Trial of Viviane Amsalem, Ronit Elkabetz and Shlomi Elkabetz’ emotional, urgent and sensational tale of one woman’s plea for her freedom. In Israel, the traditional sects of Judaism follow law that only rabbis can condone a marriage or issue its dissolution; it isn’t simply a trip to the lawyer for a divorce. Once the rabbis in the court have heard the stories from both sides, their decision is second to that of the husband who must also give his permission and acceptance for divorce – without it, the marriage remains.

Gett follows Viviane Amsalem (Ronit Elkabetz), a woman compelled to get a divorce from her husband, Elisha (Simon Abkarian) in any way she can – it doesn’t matter how long it takes her. Before the film begins, she has already spent three years separated from her family and out of her family home, trying to get a divorce but Elisha does not agree and continues to force her hand and remain married by law. It is now that they come into this court, governed by three tradition rabbis who do not look down favourably on this woman. According to them, she has misunderstood her position in society and they find her actions of moving from the family home as unsavoury as anything else she could do.

This tale is centred on Viviane’s fight for what she believes she deserves, to get away from this marriage and start again, lawfully and good in the eyes of God. But what follows is a tragedy of human rights as over a vast number of years, she continues to bring her husband to this court, continually asking for the separation. Her character is brought into question as the rabbis decide to bring in both friends and family to discuss the relationship of the couple and to decide whether it really would be right to end the marriage. But instead, it becomes a personal assassination of everything she holds dear.

Often as absurd as it is daring, the audience become just as taunted and pained by the whole affair with the ability to empathise 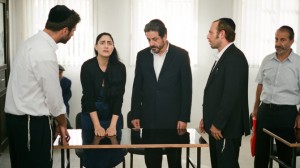 with the central character. It is the incredible emotional power and expert directing and writing talent from Ronit and Shlomi Elkabetz that brings this story to life. Whilst the majority of the film takes place within the one court room and the hallway outside, the audience are transported to the world of the characters and brought into their own trials and tribulations in just the same way. The audience are left to fill in the gaps between the visits to court and this allows them to create their own stories for Viviane and Elisha – creating strong opinions on their characters and what pushes people to this point.

Ronit Elkabetz’ performance as Viviane is spellbinding; taking the audience through a whole range of emotions. From the urgent need to getting the divorce at the start, through the madness and laughter of continuing this story, the moments when she realises that she must take her own fate into her hands and the drama that surrounds her. In particular, Ronit is incredibly powerful when she relaxes; her hair falls down to her shoulders and she starts to defy the rules and boundaries that were set upon her by men – she has no need for them anymore because she realises that she doesn’t care. These rules, she was told, were those set out by God to make Him happy, but what loving God would put a person through this pain and suffering?

Rare, beautiful, stunning and featuring one of the year’s strongest performances, Gett is a force to be reckoned with.