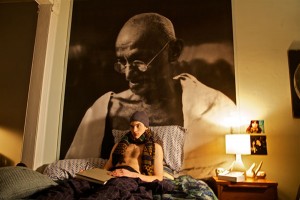 Bruce LaBruce returns with the intriguingly named Gerontophilia, meaning the sexual preference for the elderly. From the director who brought us Hustler White, The Raspberry Reich and Skin Flick comes a film, which many may find quite tame considering the rest of the filmography of this director. Languishing joyfully in blues, greys and browns, Gerontophilia follows Lake (the very handsome Pier-Gabriel Lajoie), who lives with his alcoholic, immature mother (the great Marie-Hélène Thibault) and has an odd relationship with Desiree (Katie Boland), who is his girlfriend but they both seem pretty fluid and open with their sexuality and with each other. Lake is on his gap year, with no direction and no ambition, so when his mother starts to work in a local elderly hospital facility, it seems normal for her to get him a job there.

But Lake has a very specific sexual preference, something that is so rarely portrayed in cinema, that really LaBruce has outdone himself by focusing on something so interesting. He is sexually attracted to elderly men, which is comically and ironically represented when he dives into a swimming pool where he is the lifeguard and on trying to resuscitate an elderly man who appears to have drowned, runs away with an erection, whilst teenager girls stare on and laugh in his direction. His relationship with his mother is fraught at best and he seems to be the one looking after the household, whilst she goes off partying and getting a lot of sex. Furthermore, his girlfriend Desiree is always talking about a ‘list’, presumably of girls that she could sleep with if she bumped into them.

LaBruce’s attention to detail is quite outstanding, but often hilarious and tongue in cheek as well. The back of Lake’s bedroom wall is covered

with a floor to ceiling poster of Gandhi – a reference to his morals or perhaps just enjoying the view of an old man on his wall? When he starts to work in the facility, he begins to notice that things are certainly amiss. His mother and the hospital administrator are having an affair, which he discovers when he walks in on them making out, but something larger is certainly going on. For a while, everything seems great for Lake – he is working with the elderly and keeping his mind busy but he is possibly spending a little too long giving them sponge baths? In a gripping and touching scene, he walks into a room of an old man who is touching himself to porn. He gently takes the magazine away and starts to undress seductively – the power of the scene reverberates throughout the film and starts to really drum home what the audience is watching. 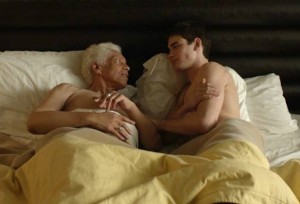 When Lake starts meet Mr Peabody (Walter Borden), an elderly gay man with no one to visit him, the two quickly start a friendship and get closer than either planned. But Lake notices that the medication Mr Peabody is being given is knocking him out cold and he begins to work out they are being given anti-psychotics, to keep them quiet until they ultimately just pass away. In the dead of the night, he decides to break Mr Peabody out so they can run away together. One scene in particular in the hospital is so very interesting; when Lake and Peabody are playing strip poker and drinking, you can see a great affection that one has for the other. Lajoie’s chemistry with Borden is unforgettable and they appear to have known each other and loved each other for years. What becomes a highlight of Gerontophilia is that once the pair runaway and start to learn about each other, you very quickly stop thinking this is an 18 and 81 year old that are sleeping together, but instead you are thrown into their passion and their love for each other in one of the most interesting and ingenious ways film has achieved in years.

LaBruce’s film is great, it’s entertaining and it certainly introduces one of the most interesting discussions about ageism, especially within LGBT cinema but what it doesn’t quite achieve is a factor of memorableness. It just does’t quite go far enough to engrain on the memory but it is certainly one worth checking out.