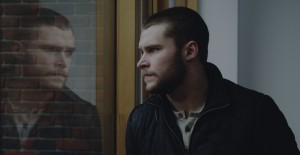 Gerard Barrett returns with his second feature, Glassland featuring powerhouse performances from both Jack Reynor (What Richard Did, Dollhouse) and Toni Collette (The United States of Tara) as a dysfunctional mother and son living in a poverty-stricken area of Dublin. Ripping the screen apart together; the pair go back and forth between a romanticised version of mother and son and a delicately portrayed woman taken over by an illness she cannot control and a carer.

The powerful opening of the film tells the audience all they need to know; John (Reynor) wakes, wanders the house looking to see if his mother, Jean (Collette) is home, adds water to a bottle of milk so that he can have breakfast before going about his job as a taxi driver to earn some money. He returns, his mother still not home and goes to bed but finds her the next morning in her own vomit before taking her to A&E because she isn’t waking up. She isn’t waking up, as the doctor explains, because she is slowly killing herself with her drinking and before long will urgently need a liver transplant. It isn’t until the following morning, where John has brought his mother home and tucked her into bed, that the audience really see the full destructive power of what is going on in their household. Jean wakes in search of bottles of alcohol, that John has clearly gotten rid of, and she destroys everything in her path to find it. She tears apart their kitchen, throwing dishes violently to the ground as well as screaming in an almighty rage as John films the whole episode to show her later on. He goes back to his bedroom before Jean (now much calmer) comes to see her son, he asks who is going to replace the plates and Jean shrugs her shoulders in a naive, childlike way before John tells her it will be him; he will wake up, work his arse off all day just to bring a little money home so he can replace the plates so that they will have something to eat from.

This is all within the first 15 minutes of the film and it’s as powerful as any opening. Throughout the rest of the film John goes about trying to save his mother and in another striking and forceful scene, whilst sitting in his taxi, John screams that this woman he is now living with is not his mother. She has gone somewhere else and he doesn’t like the person she has become. It’s an incredible juxtaposition to the scene earlier where she screams about being left alone. It seems that often between this pair, it takes a moment of loud madness for them to get through to one another. It also shows an alarmingly on edge side to John, who spends most the film trying to look after his mum but at this point, it seems he is all but ready to give up on her and leave her to die. When he learns that the only other option left for her is to go into a rehab facility, he must balance both finding the money but also getting her to admit herself.

Alongside this emotional and evocative story are several side story lines, all of which add to the intensity and claustrophobia of this brilliant 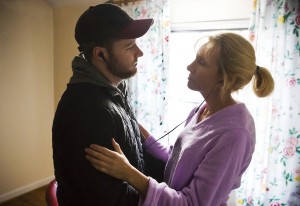 kitchen sink Irish drama but are told with a little less conviction than the main storyline. Jean has another son, Kit (Harry Nagle), who was born with down syndrome and currently lives in a home nearby. He is celebrating his 18 birthday and the only thing in the world he wants, is the spend time with his mum but Jean has no intention of seeing her son. She explains to John during their most intimate scene that she just never connected or felt any sort of maternal love for Kit. Does this make her a bad mother, the film poses to the audience but really as Barrett shows, there is so much more than meets the eye. John’s friend, Shane (Will Poulter) also has his own issues. He fathered a son after a one night stand and now the mother won’t let him see his child despite paying child support each month. His frustrations are furthered by his relationship with his own mother, who seems quite overbearing but certainly is caring. Shane is rude and disrespectful to his mother and this plays cleverly against John’s own relationship with his mother. Finally, there is one further storyline, of a young girl that is being taken around town in John’s car. Towards the end, he encounters her body in a desolate country house. The audience hear phone conversations between John and another man about the girl, which sound like a problem to be resolved. This story is told with gaps, which Barrett (who also wrote the script) assumes the audience can fill. 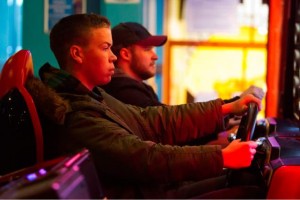 Glassland is yet another example of the excellent, powerful, intense and revelatory cinema coming from Ireland with their own stories to tell. Both Reynor and Collette are simply incredible, with two of the most powerful performances of the year. Their chemistry is undeniable and during one sequence (the only apart from the closing montage) where music is played (a brilliantly chosen use of ‘Tainted Love’), the pair play off one another in a sort of oedipal/caring sphere. For the main story alone, Glassland is a careful exploration of addition and love but also highlights Barrett as a writer/director star in the making.