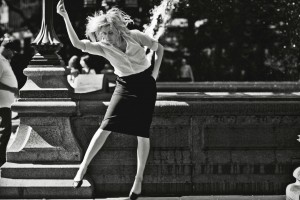 Like all the best cinema, Frances Ha is filmed in black-and-white. Alright, so I won’t get too pretentious on you, but the fact is that so few filmmakers seem to think about the use of colour in their films beyond a basic palette, and that makes Noah Baumbach’s monochromatic decision here speak volumes about how he’s approaching this particular story. It feels immediately timeless, existing in a barer world, leaving it to the script and the cast to add the colour to the story.

The obvious comparison point, due to the cinematography, the acerbically reflective script, and the New York setting, is Woody Allen’s Manhattan. Frances Ha certainly sees a shift from Baumbach’s bitterer previous work about stunted, cold characters (The Squid and the Whale; Margot at the Wedding) to the more fleet-footed tale of Frances (Greta Gerwig), a twenty-something New York woman who is dumped by her boyfriend and abandoned by her best friend Sophie (Mickey Sumner) before the story has really even begun. Frances is forced to accidentally happen upon some new accommodation, an issue that becomes the driving force of Frances’ movement through the story. These shifts are not as elegant as her ballet dancing passion; but Frances apparently isn’t good enough at that either, as the dance company mistress Colleen (Charlotte d’Amboise) keeps Frances relegated to the understudy of the more poised Rachel (a cautiously dry Grace Gummer).

Gerwig, darling of the indie set, has previously been described as Baumbach’s ‘muse’, after stealing Greenberg from its nominal star Ben Stiller and entering into a relationship with her director during the filming of their latest film. But Frances is as much Gerwig’s creation as Baumbach’s, with the pair sharing co-writing credits here, and with Frances being to Gerwig what Woody Allen’s characters are to Woody Allen – that is, basically themselves in fictional form, or at least their public personae put on screen. 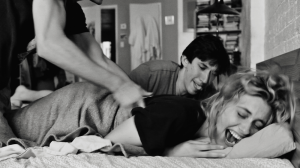 Frances is as neurotic, awkward, exuberant, nervous, reticent and shameless as the characters that Gerwig has built her reputation on. But this is not to say in the slightest that she is not also the writer and actress’ finest creation in her young career, a simultaneously sympathetic and maddening heroine who drives a story that is largely uneventful. When Frances takes a spur-of-the-moment trip to Paris, there are no generic shots of the Eiffel Tower – though the Arc de Triomphe sits teasingly outside the apartment window – and Frances, to her own chagrin, spends most of her time asleep and leaving messages on her unresponsive Parisian friend’s answering machine. The magical charm of life is an impossible illusion for poor Frances, as it is indeed for most of us.

Frances quickly becomes labelled as “undateable”, adopting the term as an in-joke catchphrase with one temporary roommate, Benji (Michael Zegen), but the mere gender difference between the pairing spikes these interactions with an awkward undercurrent, particularly when they run into each other a few months after Frances has moved out. Frances goes on dates, but love doesn’t seem to be any more heavily pursued than the other desires in Frances’ life. The purposefully skittish narrative’s main driving force is her crumbling friendship with Sophie, a more studious and grounded figure whose relationship with someone Frances dismisses as boring and uses to buy the most expensive bottle of vodka in the building. As much as the film charts Frances’ attempts to reconfigure her approach to her goals in ways she is obviously not accustomed to, it’s too about the intimacy (“we’re like a lesbian couple that doesn’t have sex anymore”) and difficulties of female friendship.

Like the enormously successful Girls on HBO, Frances Ha taps these fraught female camraderies, and into the cultural zeitgeist of the aimlessness of the post-college years and the self-destructive attachment to that transient state of life. That might mean that Frances Ha is one for the writerly types like me, and probably you, reader – those who care enough about cinema to analyse, discuss and write about it, introspection by way of examination. But like Woody Allen’s classic films before, there are a lot of neurotics out there, yearning for the skewered reflection of themselves on screen. Frances Ha is not a psychological document, it’s an indelible character sketch, a witty, bright and honest portrait of this time of life.