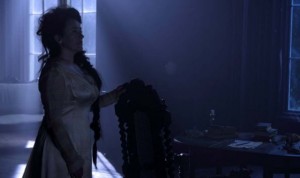 Not long into the 80 minutes (or so) running time of Eliza Lynch: Queen of Paraguay, one might wonder if the “whole thing is going to be like this” – this being an aesthetically busy hybrid between straightforward documentary and the kind of lo-fi fictionalisation of history one can expect to find whilst channel-surfing after the latest upgrade to one’s digital television package. Sadly, to the question as to whether Alan Gilsenan’s film will continue in this fashion, the answer turns out to be a resounding and off-putting yes.

Eliza Lynch’s life is something of a curiosity. The basis of Gilsenan’s documentary is a biography written by Irish academics Michael Lillis and Ronan Fanning – the outcome of 18 years of research. Born in Ireland before the halfway point of the nineteenth century, Lynch escaped the famine plaguing her country as a child, and was subsequently brought up by nuns in Paris. Eventually marrying the wealthy Paraguayan military dictator Francisco Solano López, Lynch became an uncrowned national treasure – though her husband’s unsuccessful war with Brazil in the second half of the century ensured a crueller fate.

No subject matter is off-limits in art, and in the hands of a confident enough director, any material can be compelling. On this evidence, though, Gilsenan was presumably torn between not having enough funds at his disposal in order to dramatise Lynch’s life as a period film, and not having enough confidence in the subject. As a result, the director tries to do both: talking heads are interspersed with dramatic soliloquies delivered, by Maria Doyle Kennedy as Lynch, to an imagined listener (and from beyond the grave). Appearing at the top of a stairwell (stately, like plump Buck Mulligan), Lynch tells us she was a woman wronged, and Gilsenan mounts a number of corroborating testimonies from academics, descendants and others to prove the case.

Trouble is, Gilsenan and co. assume Lynch’s arc demands a heavy-handed treatment. There’s scarcely a moment here without musical accompaniment, and the talking heads are filmed, inexplicably, with two-camera set-ups, with Gilsenan cutting from one angle to the next so frequently that you could be watching it on VH1. Maybe this is a preference thing, maybe it isn’t. Crucially, though, the biggest mistake Gilsenan makes is to equate individual psychology with inherently compelling historical drama. But when the war between Paraguay and Brazil is reduced to a single general being “a spoilt brat”, one irrefutable counterargument persists: history, with all its economic bases and social contradictions, is not merely a conspiracy theory.