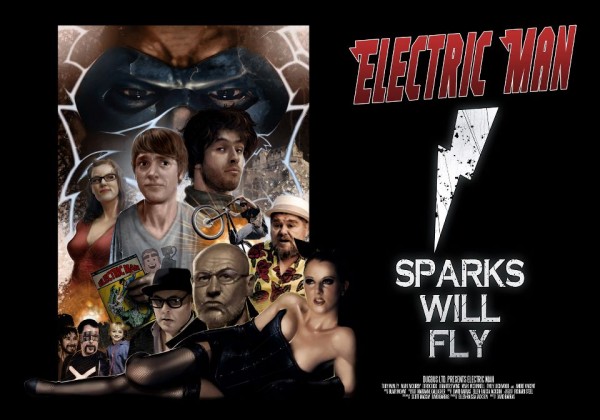 With Electric Man, David Barras and Scott MacKay are providing a glimpse into the future. Their future will be a successful one based on the awesome potential shown in their first feature film. Barras and MacKay draw from many inspirations and create a superhero-fashioned Scottish version of Clerks. Considering the continued success of Clerks maestro Kevin Smith, the two young filmmakers would probably be delighted with that comparison and they do show sure signs of having the same enigmatic talent. Creating a brand of simple humour that has been heralded and continuously successful is no mean feat, Barras and MacKay may well have that kind of success at their fingertips with such an assured debut destined for cult classic status.

Jazz (Toby Manley) and Wolf (Mark McKirdy) own Deadhead comics in Edinburgh and are struggling to raise the £5000 they need to pay their landlord. They happen upon an issue of Electric Man No. 1 amongst their back issues, a comic that is worth nearly £100,000. They are unsure how it came into their possession but know that it could solve their money woes. Little do they realise that the appearance of this comic book will catapult them into a world of sinister figures desperate to get their hands on the valuable item.

Part of Electric Man’s strength lies in its balanced mix of comic book gags and Scottish humour. These two seem to blend together perfectly in a delightfully unexpected way. Mixing dour Scots funnies with over the top comic hijinx, Barras and MacKay have created their own unique brand of comedy with much crossover appeal. Very similar to a certain Mr Smith. 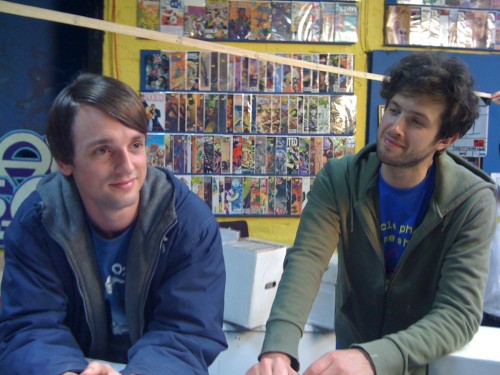 Electric Man is far from perfect however but that should not deter the debutants. It is slightly too long at 100 minutes, the film would benefit from some heavy editing which would produce a much leaner more concentrated film as it does tend to wander. It is very possible that this was intentional but it suffers significantly from drops in flow. The story is also highly contrived. Again this may be intentional but the sum of the separate parts does not constitute an entirely rewarding pay off.

This film is a wee cracker though, something out of left field. It’s great to see young Scottish talent producing such eye catching work. Barras’ direction is focused and clean with a hint of the comic melodrama thrown in for good measure. Barras and MacKay wrote the script together and they certainly have an eye for a visual gag. Though most of the film takes place in Deadhead comic book store, there are a few great action sequences. A small child stealing a comic culminating in an Indiana Jones style power-slide under a large kilted Scot to escape his clutches. As he slides the camera looks down from inside the kilt to see the child’s horrified face as he glances up the kilt of the gigantic man. Just one of many instantly classic moments that should ensure success for this tiny independent venture.