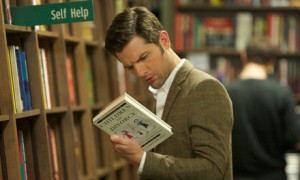 A.C.O.D. or Adult Child of Divorce is the directorial debut by Stu Zicherman, which premiered earlier this year at the Sundance Film Festival in Utah followed by the international premiere at Sundance London this weekend. A.C.O.D. is a very special film, with a tender and sweet heart at its centre and although it doesn’t come off completely as it should, all the ingredients are there for a classic indie comedy in the making. Featuring an all star cast of Adam Scott, Jane Lynch, Mary Elizabeth Winstead, Jessica Alba, Amy Poehler, Richard Jenkins, Clark Duke and Catherine O’Hara, there is certainly no lack of acting talent in a film, which tries to make a joke of divorce.

Concentrating on Scott’s character, Carter, A.C.O.D. boldly steps where very few films have dare gone before and it astounds me that it hasn’t already been done. We now live in a social climate, which openly accepts divorce as the film proudly exclaims ‘1 in 2 marriages ends in divorce… This one ended shitty.’ It is of course talking about Carter’s parents marriage (Jenkin & O’Hara), who divorced when Carter was nine years old and haven’t been able to stay in the same room with each other ever since. Carter’s younger brother, Trey (Duke) is now getting married himself and wants both his parents there, which is no small task but when you consider that both their parents have gotten married since, you realise that is a lot of people to make happy. Of course Trey, who hasn’t got a job and lives in Carter’s garage, backs out of the task of speaking with his parents and enlists Carter to break the silence.

O’Hara’s Melissa is a mother who does want the best for her children, but she also wanders around figuring that she is the boss and everyone around her (mainly her ex-husband) should do exactly as she says. 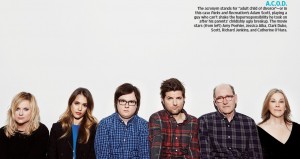 Sure she is bossy and doesn’t really show that she cares much, but she is also incredibly strong and it is really great to see a divorced older woman on screen who isn’t afraid of mincing her words. She is married to Gary (Ken Howard), who is possibly the most helpless and lovely character in the entire film, with not much screen time, he is mainly there as an asset for Melissa to prove that she has gotten on with her life. Her ex-husband, Hugh (Richard Jenkins) is an older man who only thinks with his dick, finding the next young woman that takes his fancy. We find that he has gotten married twice since Melissa, and during the film we meet his third wife, Sondra (Amy Poehler), who Carter has nicknamed ‘Cuntessa’ because she owns the building where Carter’s restaurant is and doesn’t care enough to create a relationship with Carter.

Carter’s job is to simply make sure the peace remains and brings his parents together over a meal to try and force them to stay in the same room. This sequence in the restaurant is one of the funniest of the film because it deals head on with a couple who cannot stand the sight of each other. When Hugh comes to the table, Melissa is ready to leave but she doesn’t want him to win, so she stays and Hugh doesn’t want to leave because he wants to spend time with his son. They simply want to outdo each other and show they are the better parent; well Carter doesn’t stay and here starts the next part of the film. 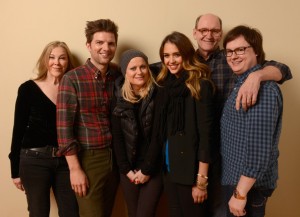 Without giving anymore of the story away, what ensues to a hilarious family comedy with light flourishes of melodrama. The workings of Hugh and Melissa’s relationship is delicately portrayed in such a way, that whatever happens you fully support their decisions. Whilst they are trying to find a balance of each other in their lives, Carter finds out that when he was a child, he was a subject in a study looking at children of divorce. He thought he was going to a therapist, Dr. Judith (Jane Lynch) but instead she was writing her book, which had made her a lot of money. She has since come up with an idea to look at her patients again, 20 years later and see how the divorce affected their adult lives. She is interested in Carter, his relationship with his girlfriend, Lauren (Mary Elizabeth Winstead), which doesn’t seem to be going anywhere fast and why he feels he has to parent his parents and be in control of their situation.

Performance wise, the entire cast are nearly perfect playing the careful nuances of the script in such a way that you cannot miss the humour but are always very much debating the ideas of divorce and its affects in your head. Although this is a comedy, it is one that makes you think and contemplate how we got to a point where families just aren’t sticking together. Jane Lynch near enough steals the shows, portraying Dr. Judith as a woman who had once had a taste of the limelight with her original study and is now lacking in ideas to make anymore money. She is unique and rather out there with the ways in which she speaks to her patients but she is also a great fountain of advice and when Carter really needs it, she tells him to look inside himself to accept his family for what they are; whether they work or not. In particular, Lynch takes a character that could have been very standard but manages to integrate herself into the story, making her hugely important. There is one scene, where she is explaining her new study and without making any point of it whatsoever, takes her chewing gum from her mouth and places it on the edge of her paper; it’s a brilliant move because the bright blue gum is directly in your eye line for the entire scene.

Looking at the rest of the cast, they are all brilliant comic actors delivering every joke so that you make the audience laugh. Poehler does a wonderful 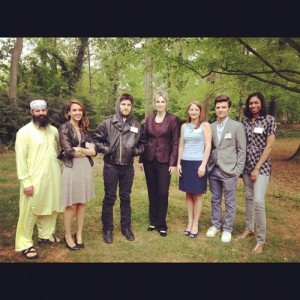 job as someone who really hates everyone around her and particularly her step son, Carter who is possibly only a year or so younger than her. What is great about Poehler and Scott in A.C.O.D. is that they play the total opposite to their in love and happily married characters in Parks & Recreation. It was great to see how professional the pair are and how they are really brilliant comic actors, in portraying their venomous and hateful relationship. Even Jessica Alba is rather entertaining in the film; just like Gary, she isn’t a big part of the film but is a device to make Carter re-evaluate everything in his life and what he appears to be taking for granted with Lauren. As for O’Hara and Jenkins, they were stunning as the sparring couple; from the hatred across the room to the lighter moments when they are considering their relationship, they created the real drama of the film and yet it still made you laugh.

A.C.O.D. is a clever celebration of where comedy is moving towards, making jokes at something that traditionally is sad and dramatic. It is ultimately played for the laughs, and although they come thick and fast, there isn’t much else to the film in terms of what it is trying to say. It has the makings of something really special and heartfelt, with performances from some of the best comic actors around today.