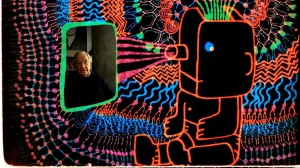 What must it be like to talk to “the smartest man alive”? For Michel Gondry, it seemed an overwhelming task. Trying to compute everything that linguist/economist/sociologist/political scientist Noam Chomsky has to say must be one of the most daunting tasks a man could face. Yet the French director takes to it with a stout heart and his ever creative mind, deciding to animate 98% of the film. What is produced is mind blowing conversation and a delightful visage.

Parts of the film look like one of Gondry’s old school music videos, bizarre images spring from nowhere in conspicuously hand-drawn style. Gondry uses the ideas that Chomsky dictates to bring to life dazzling frames of madness intertwined with the great man’s mercurial scientific mind. This is very much a labour of love for Gondry, the time it took to complete the animation, the use of an ancient handheld camera, every detail screams out how much care was taken to make the film. He also aids the audience, as a middleman, to disseminate Chomsky’s stream of thought and for that he should be lauded. Two men, so different in mind, come together to create the kind of documentary that is so engrossing, it’s just disappointing that they are not making a series.

Castles in the Sky is the kind of film that promises to be interesting but, while not coming close to achieving that, still manages to be 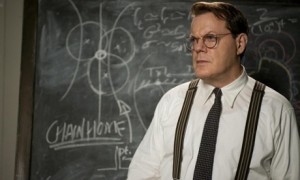 vaguely entertaining. The initial tone of light comedy on a dark background is intriguing but becomes tiresome once it becomes apparent that the film is nowhere funny enough. Perhaps the tale of radar inventor Robert Watson Watt should be far more serious given the circumstances in the late 1930’s, but for Castles in the Sky, Eddie Izzard will just have to do.

Though Izzard brings a certain dignified daftness to the role and the circumstances under which he works are reminded with superb footage of the Nazi war machine being built, the film is still no more than a light-hearted dedication to ingenuity and the spirit of scientific discovery. While not to be sniffed at, the tireless work and achievement of Watt and his team deserves more. The old footage of the war is splendid but Izzard and his motley crew are not capable of delivering the intensity need at the right moments.