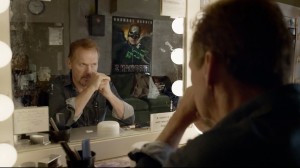 With his new film BiRDMAN, Mexican miserablist Alejandro González Iñárritu shows he is capable of changing pace, but not necessarily in a manner that will be to everyone’s liking. With previous film Biutiful, Iñárritu showed a promising willingness to change, discarding the trademark interlinking story format that had first made his name and later sullied it in first three films Amores Perros, 21 Grams and Babel. Yet despite loosening himself of the format that had proven creatively limiting, Iñárritu was unable to shake everything that weighed him down, that film again following miserable characters fated to miserable situations, to its detriment. With BiRDMAN, change is afoot again, a new Iñárritu loudly on display. Gone is the structural gambit (though replaced by another), and gone is the inherent miserablism, but present in abundance are the heightened dramatics, overegged sentiment and lack of subtlety in any form that have run an unfortunate course through the work of this evidently talented director plagued by an inability to state anything lightly.

BiRDMAN opens excitably, bold red pop art type popping discordantly onto a black screen to the rumblings of a jazz drum score, building a rhythm and energy that is sustained for the duration. Excluding the two opening shots (the first of a cloudy sky, the next a levitating Michael Keaton, both abstruse, overreaching and barely connected to the film that follows) BiRDMAN unravels in what appears to be a single take. Emmanuel Lubezki’s highly mobile camera rocks and rolls around the Manhattan theatre that most of the film takes part before gliding upwards to the sky at the end of each day, fixing on it as night turns back to day in rapid timelapse, before rolling back down to the earth again to resume our story. Its an impressive technique. giving all of the film’s events an immediate, almost exhausting energy, but its not exactly clear what purpose it serves. Lubezki’s camera operators lock the characters into tight closeup, thundering along with them as they rush around the narrow corridors of the theatre, out onto balconies and the Manhattan streets,

it seems as if Iñárritu asked Lubezki (Director of Photography on Tree of Life and Gravity so well versed in both a classical, and innovative, approach to cinematography) to emulate Hitchcock’s Rope, which is also shot in stitched long takes, and update it for modern attention spans, replacing a perceived audience need for rapid fire cutting with hyperactive movement, CGI effects and other (undeniably impressive) camera trickery. The level of choreography and planning of space and light here recalls a more energised version of Russian Ark, also one take and also largely shot indoors (Sokurov’s St Petersburg Museum affording a more careful pace than Iñárritu’s Manhattan theatre.) The most virtuoso of these moments, a long take at runner’s pace, sees Keaton running through the New York City streets (the specifics being all important in this instance, so excuse the vagueness), the camera stretching to the widest it has been as we are taken truly outside of the theatre setting for the first time. This take, still marvellous, might have been more impressive if were the single long take in a film of shots of varying length and more interesting compositions. As is inevitable, the structural limitation starts as a wow-factor, and becomes both a gimmick and a compromise as the film continues.

Iñárritu’s story sees Riggan Thomas (Michael Keaton playing an otherworld version himself) as the ex-Hollywood actor of the ‘Birdman‘ franchise looking to achieve artistic satisfaction in theatre, having tired of commercial success in the box office, runs an obvious parallel to Iñárritu’s own attempt at reinvention with this new, different style of film. (And indeed, Keaton’s, who hasn’t been seen much recently, and is now an Oscar front runner.) Riggan chooses Raymond Carver as his source text, overreaching as Iñárritu does, and dooming himself to (noble, Iñárritu would argue) failure in the process. “Why Raymond Carver?” Norton asks Keaton at one point. One might be inclined to ask Iñárritu the same.

With BiRDMAN Iñárritu plays frequently with layers, actors playing actors playing versions of themselves, Hollywood playing Broadway. Early on Keaton’s character enters a scene of the play he is directing and morphs from director to actor seamlessly, switching seamlessly between direction and dialogue, practised lines and improvised ones, and frequently brings into question whether he is speaking as Riggan, as Keaton, or as Iñárritu himself. The viewer’s knowledge of these actor’s previous roles (Keaton and Batman, Norton and Fight Club etc.) plays into their understanding of the film and how the two universes (‘Birdman’/Batman etc.) cross over, notably in an early joke where before picking up Norton, Keaton’s producer Jake (an effective, low key Zach Galifianakis) laments the unavailability of better choices Downey Jr, Fassbender and Renner, all tied up to their own successful comic book franchises.

Indeed, so close are the linked worlds, ‘Birdman‘ speaks to Riggan, appearing as a gruff Christian Bale Batman voice in his head, the most literal approximation of the artist’s internal struggle possible. Riggan also assumes some of the powers his ‘Birdman‘ character had, swooping around Manhattan in a pointless scene that seems only to offer some variation to the one take gimmick, opening up the manhattan skyline to Lubezski’s virtual gliding just as the indoor scenarios are becoming stagnant. As Keaton swoops, all manner of CG creations arise around him and battle, before a snap back to reality dismisses them. In this offhand joke, Iñárritu dismisses the merit of all mainstream cinema, highlighting his own unwarranted snobbishness through a completely misfiring joke scene.

Iñárritu’s focus is on performance and on art, what it means to work and to create. Acting as counterpoint to Riggan troubled recovery is his lead actor Mike (Ed Norton, great in this and also in need of reinvention) who, in the film’s best and also most troublesome joke, is so committed to his method acting attempts unsimulated sex with co-star and half-girlfriend Lesley (Naomi Watts). Watts does her best with an undeveloped role, as do the props/partners that are Riggan’s daughter Emma Stone, girlfriend Andrea Riseborough, and ex-wife Amy Ryan. Ryan’s character, so blatantly only written in to advance plot, shows up halfway through unannounced, serves her one-dimensional purpose and disappears unceremoniously. The most clever character perhaps, is the introduction of a nemesis to all creators in vile theatre critic Tabitha Dickinson (Lindsay Duncan), whose bitterness colours her critical faculty – those who can’t create, critique right? Any critical rejection of BiRDMAN comes off as upset at the portrayal of critics, rather than genuine problems with the film’s considerable flaws.

One of the main problems is that none of it as clever as Iñárritu thinks it as. Every idea, joke or message either bludgeons the viewer with its directness, and worse with its smugness; or is hurled out without consideration or justification, packaged in an idiotic witticism like “popularity is the shitty cousin of prestige.” Iñárritu asks these constant broad questions, about art, performance, life and integrity but delivers few answers. Those that arrive are at best hackneyed and conventional, and at worst infantile. The one-take approach, other than being a talking point for the film and a piece of spectacle and showmanship, seems present mostly to mask the emptiness of the film. If Iñárritu and Lubezki whisk us along at such an intense pace whilst shouting CLEVER IDEAS at us, we won’t have the chance to actually think about them, and realise they make little sense. It’s a ride for sure, but far from a smart one.